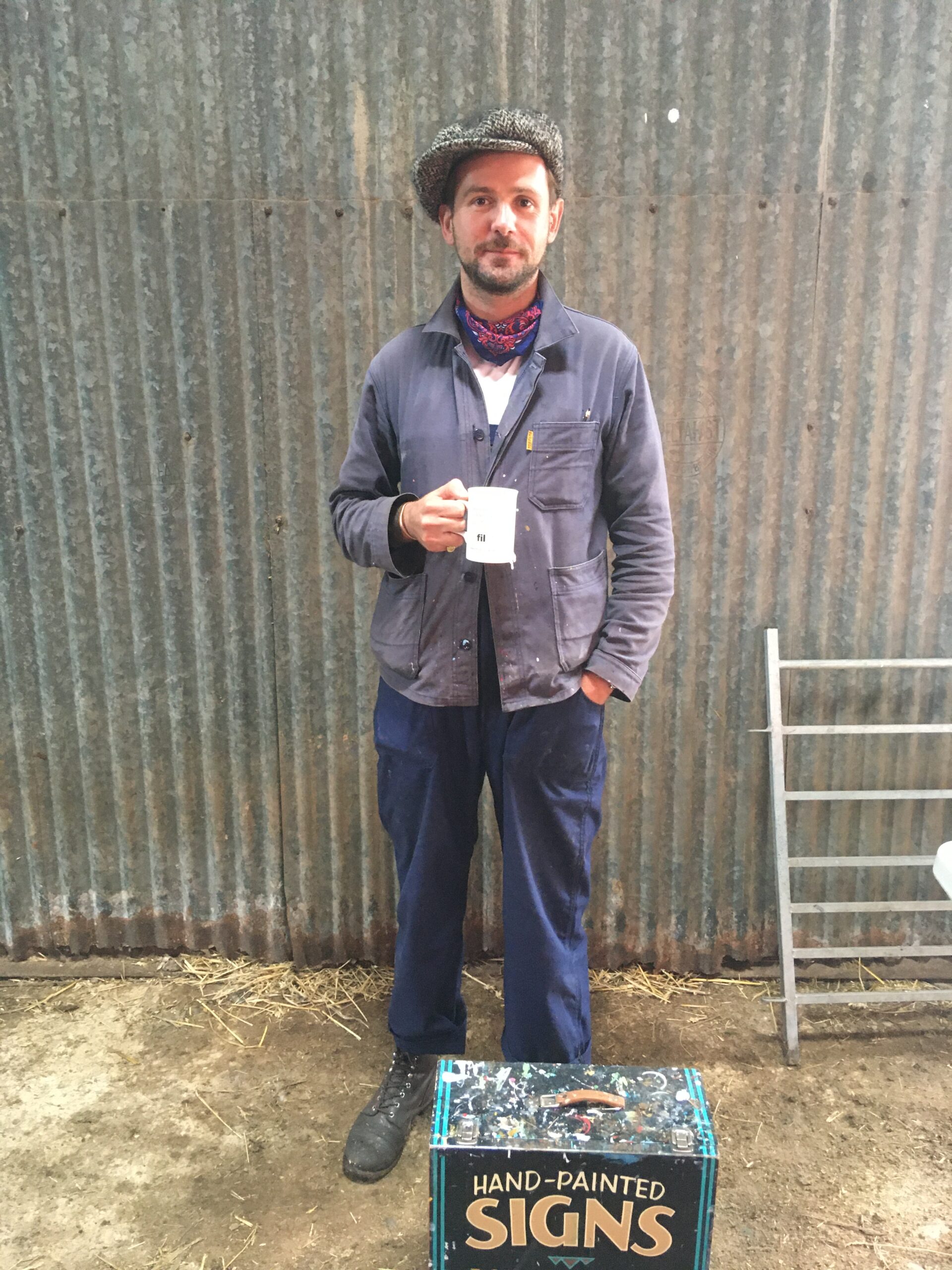 Ged does Sign writing in London.  He has his own high street shop in London; the ‘Luminor Sign Co.’ His sign writing can be seen all around London, brightening shop fronts and bringing life to brick walls about the city.

Meet up with Ged Palmer in Herefordshire:

Today I’ve driven south to Herefordshire to meet Ged at a friends farm house where he is staying and over the next two days he will be doing some hand painted sign writing on my van.

It’s bucketing with rain. Not ideal sign painting weather but there is a large barn we can park up inside and begin cleaning off the van.  Ged sets up his box, gets out the final design on paper which has ben pierced and has fine holes dotted all around each letter.

It’s a method called pouncing whereby the letters are bashed out with chalk before being painted. The dotting method is not dissimilar to that of painting a mural . You know – « like the Sistine Chapel » Ged says with a smile.  Once. you have this you can hold it up against a surface and back a pad of chalk against it leaving a dotted outline of where to begin painting. After the 1st layer of oil mixed with a Tint of gold goes on it is left to dry tacky, when ready the gold leaf is layed on and the excess brushed off. Lastly a layer of varnish is painted on over the top to ensure it all stays in place. 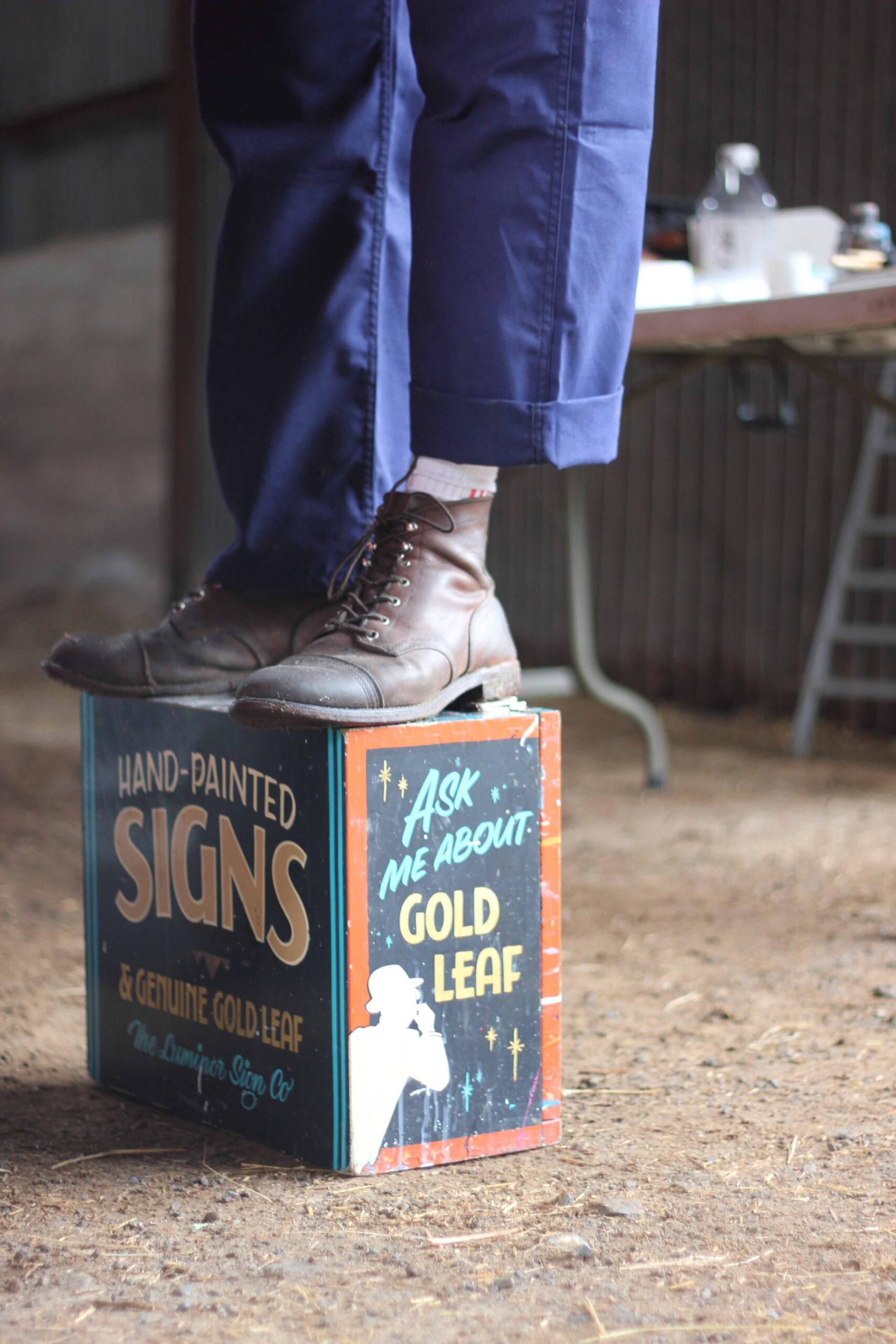 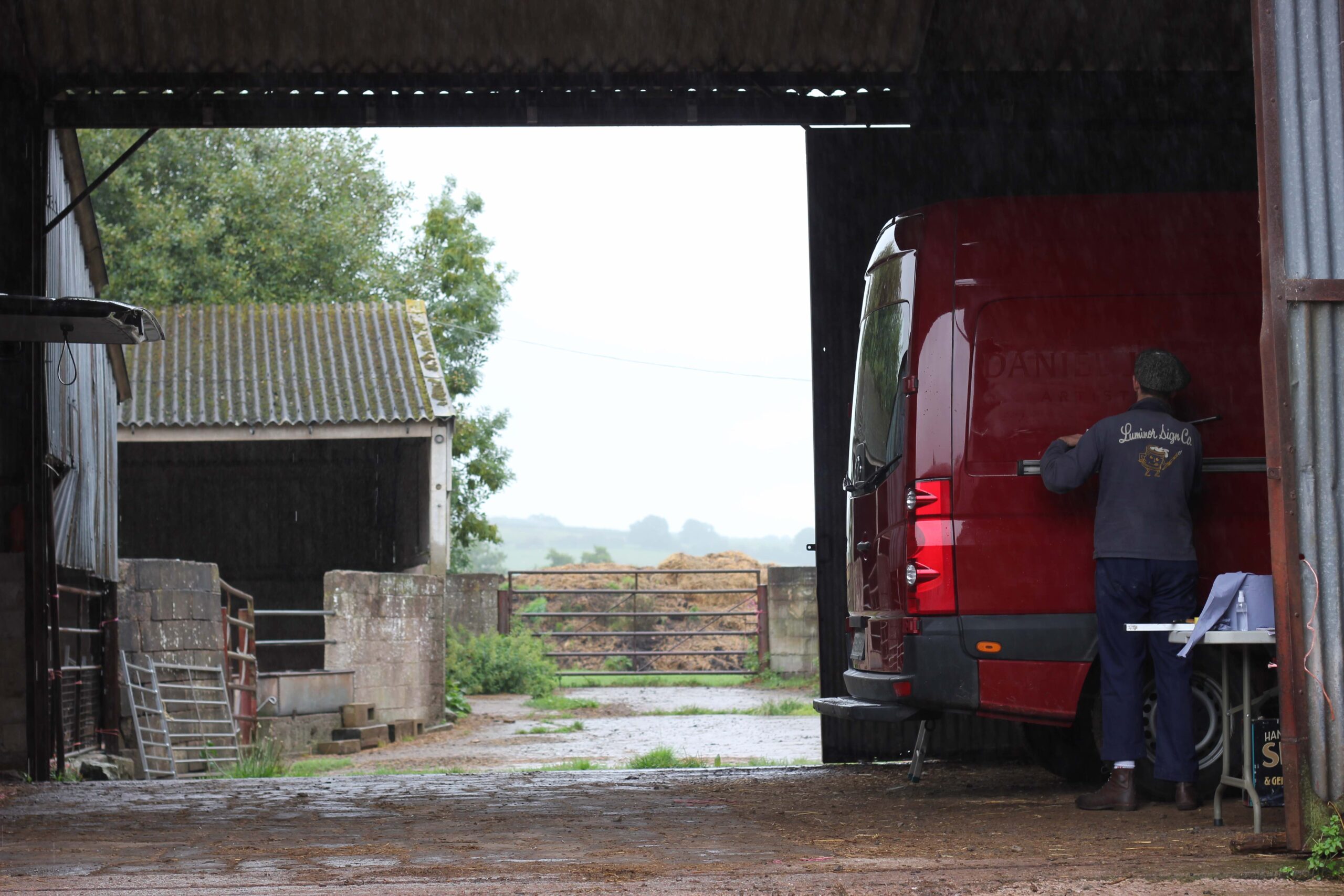 As Ged’s working we chat away. Well Ged concentrates while I do my best to ask questions without causing too much distraction.

It turns out Ged was always interested in Comics as a kid.  As he got a little older was drawn to graffiti and working at festivals. At some point along the line Tom lane gave a talk at his university about letter design and sign writing. Ged was so inspired he decided to go and visit Tom’s studio. Ged was immediately taken by this guy and his way of working in his studio, painting lettering and designs by hand.  He asked Tom there and then  » Can I come hang out, and do some work with you? », and that is where it all began.  In Tom’s basement(at the time) working , helping in illustration which went on to last for 2 years. 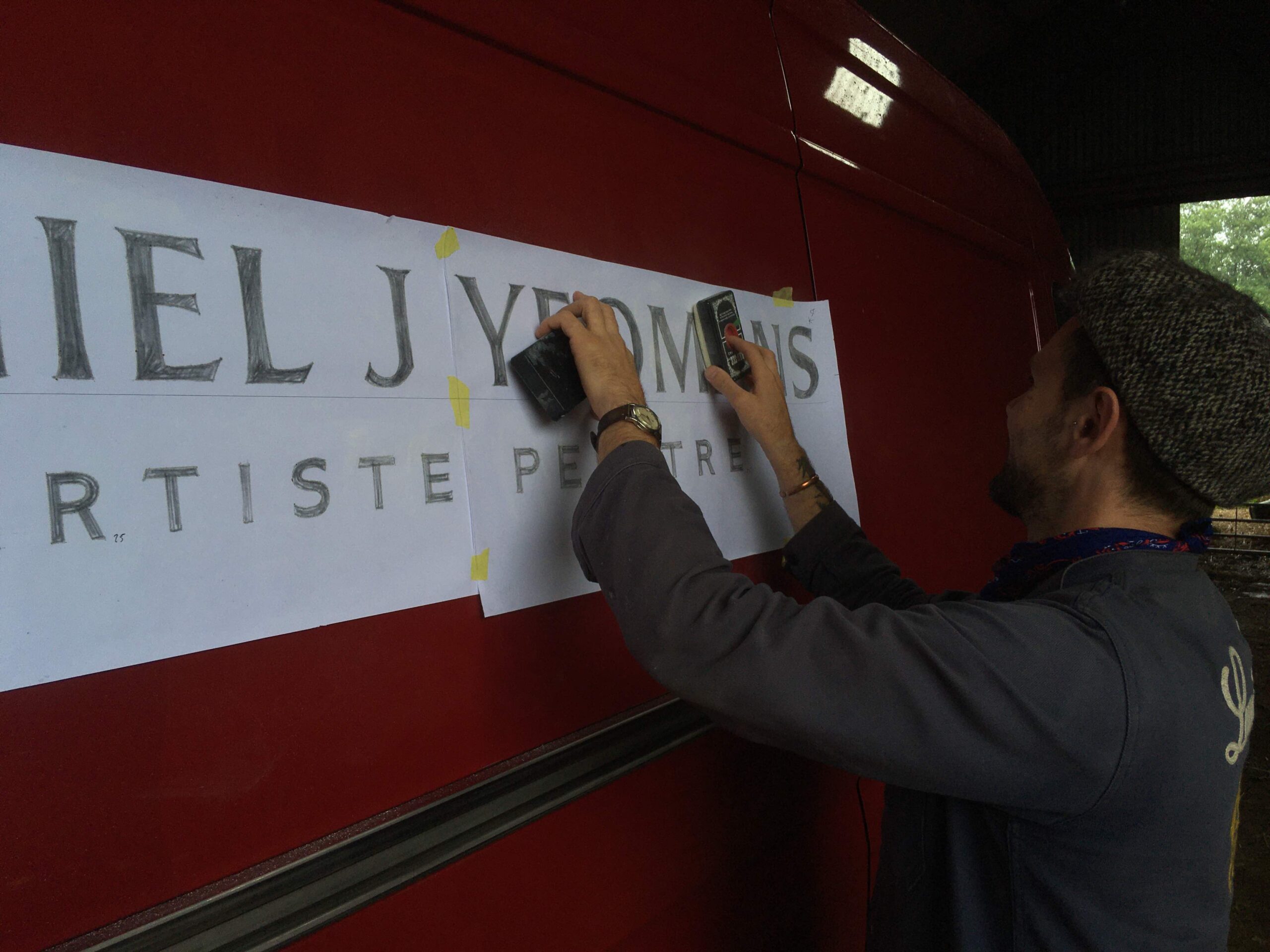 At some point toward the end of this period working together they did an unpaid, mural painting job in a cocktail bar (Murals and sign painting being all quite new to them at the time having mostly been doing indoor design work).
This in turn led to Ged being offered a job doing branding for the Gallimaufry.  After coming up with some designs he realised that he couldn’t just paint this design using whatever materials he could find and really needed to seek out some professional advice in terms of materials and painting outdoors for longevity.

So he called up ‘dapper signs’ in Bristol and asked for some advice. What paint should he be using, and for some tips on outdoor jobs like this.  In the end ‘Dapper Signs’ and Ged went 50/50 on this job and this collaboration continued for a while.  Ged was getting the jobs and by sharing the job meant he was able to learn about the materials, techniques, procedures, drying times and much more.  This partnership gave Ged a knowledge and confidence to grow and continue. 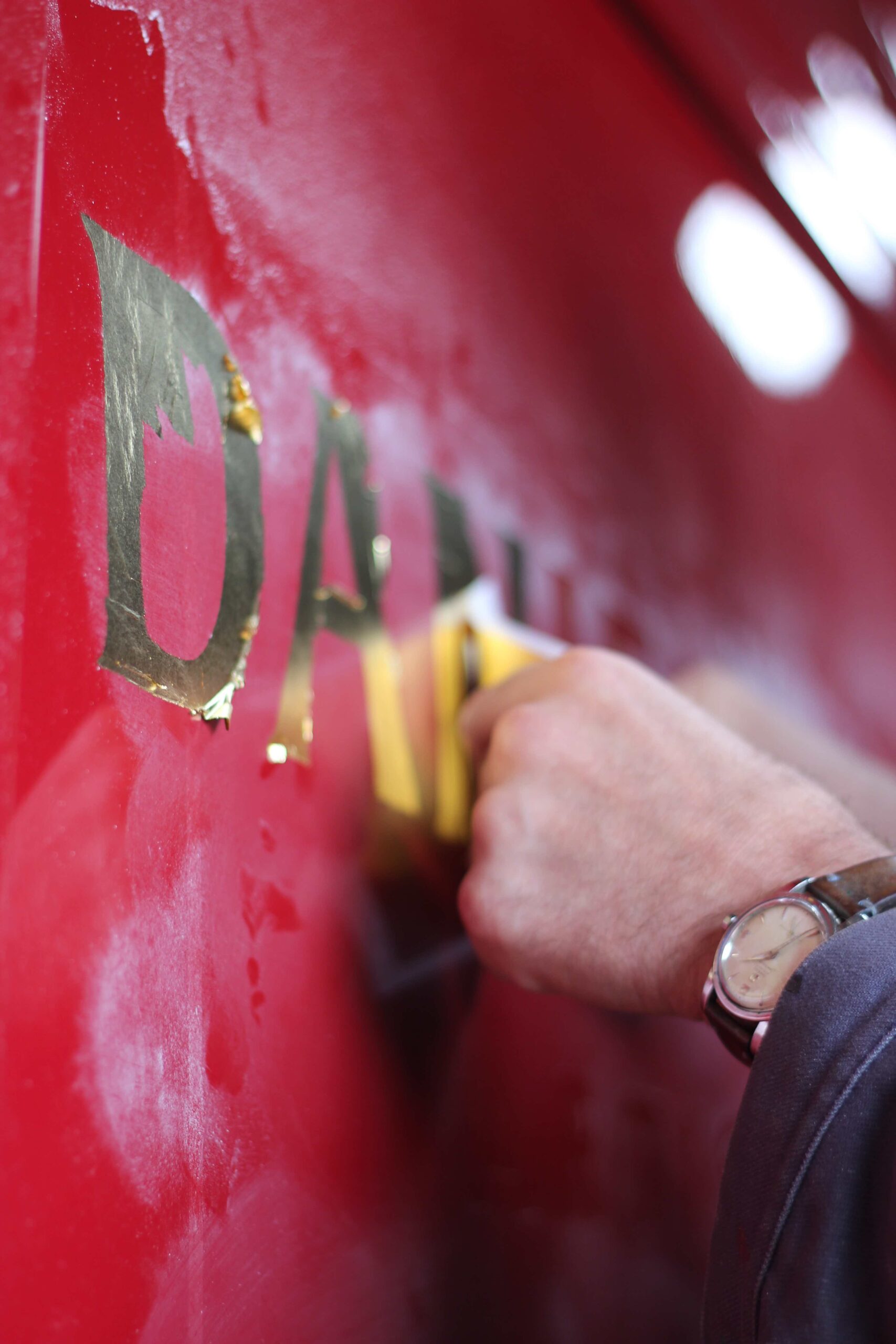 The Next stop on Ged’s journey was San Fransisco!

At this time Ged was living in Bristol. A few emails were made back and forth, with a guy called Derek McDonald in San Fransisco. Ged soon decided he wanted to go and experience a sign writing studio in full flow. Described by Ged as the Mecca of Sign writing San Fransisco was an absolute must. Eventually he organised to go and hang out and paint with the guys at the ‘Golden West Sign‘  sleeping on the shop floor for 3 weeks.

On return, living in Bristol Ged was gradually building a rep as a sign writer. This period included commercial lettering jobs with 7up and Best Western.  Eventually deciding to take the leap and move to London. In the first 3 years moving studios 4 times and now ,for the last 3 years Ged has been in a high street shop running his own studio and business – the Luminor Sign Co.  He now, has apprentices visiting from around the world and passes his knowledge along as he has learnt from others. 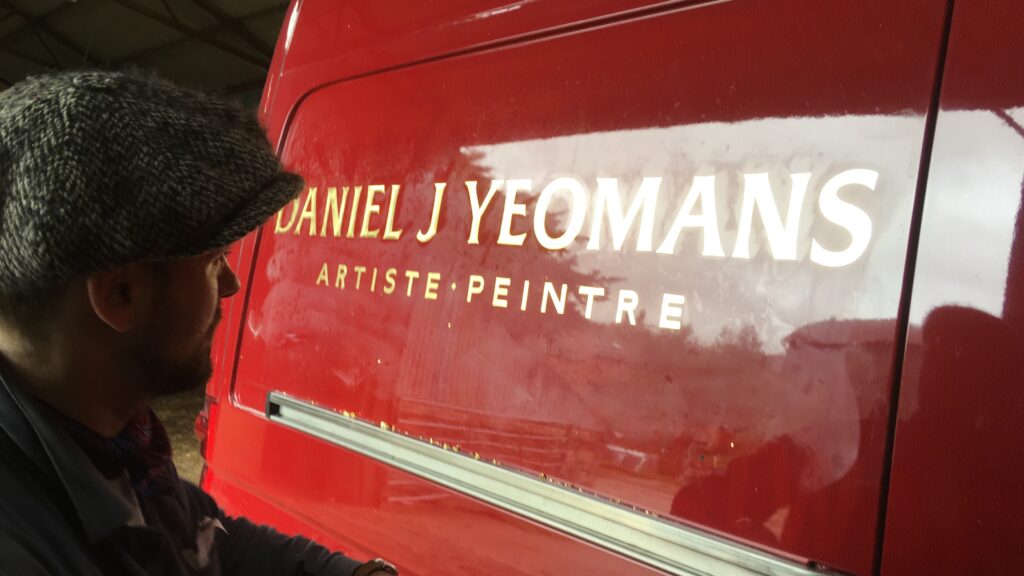 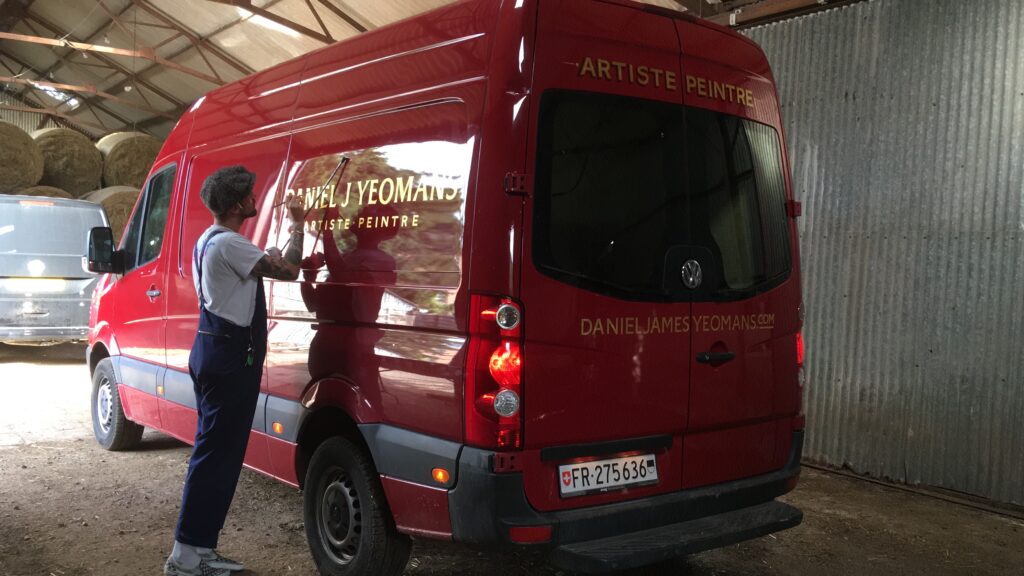 Keep an eye about for Ged Sign writing in London. You can of course follow Ged on Instagram also please visit his website!  And look out for my hand painted van driving about the Swiss Alps or British countryside 🙂