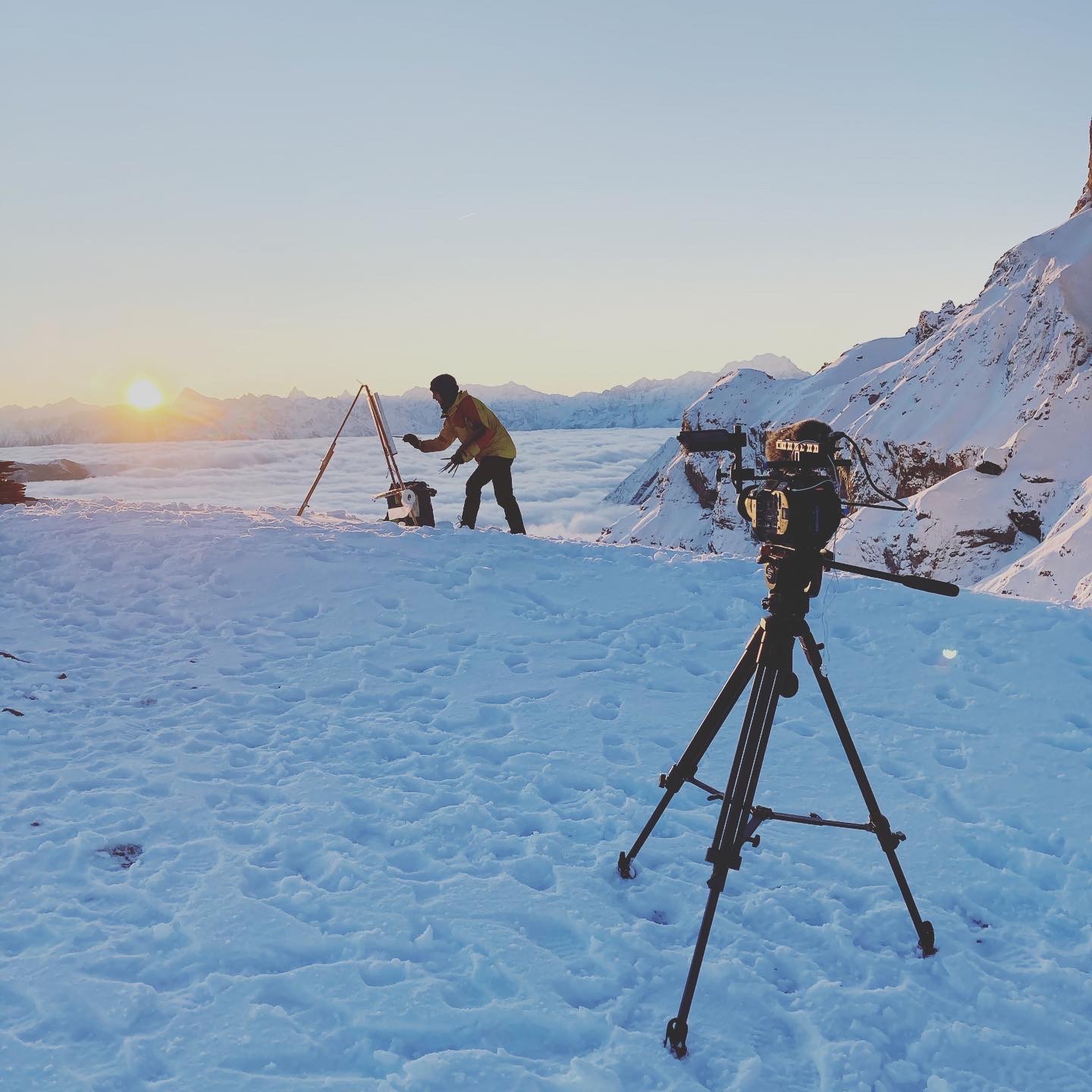 It took some time.  We had a plan, but it’s surprisingly hard to get enough consecutive days of similar autumnal weather.  High up in the Alps on the  Axe Apollon – Saint-Michel where every side of each peak has its own micro-climate.

Finally, just before I need to head to Wales again we get a window.   I get the train to Champery with my bike, two pannier bags, and a backpack full of things.  I’ve packed light, which means, other than my hiking gear I’ve only got one teeshirt for the week that I’ll spend in the town below.  I’ve packed dry food to keep it light and otherwise as little as possible for the 3 days in the cabin.  My backpack still weighs nearly 20kg, they don’t make lightweight oil paints yet apparently.

Our original plan was to get on top of Dents du Midi.  It snowed last week though, making it is much too dangerous to get to the peak, let alone paint on it.  So plan B is to reach the Refuge de Chalin from the other side of the Dents to Midi.  It is still high, sitting at 2,600m and there will be snow, but the risk is less.

Julien & Jules are accompanying me on this trip and will be making a short film about my process of creating landscape paintings.  They are two very talented guys so I’m thrilled to be working with them.  You can see their films, documentaries & other works on their respective websites – Jules Guarneri & Julien Roserens.

Coop supermarket car park at 9:30. The boys couldn’t fit the drone so have left it at home and just brought the one camera. Halfway up Julian is mumbling something about the views appearing in front of us where the drone would have been great.  Still, we all feel like pack mules and can’t fit anything else in. 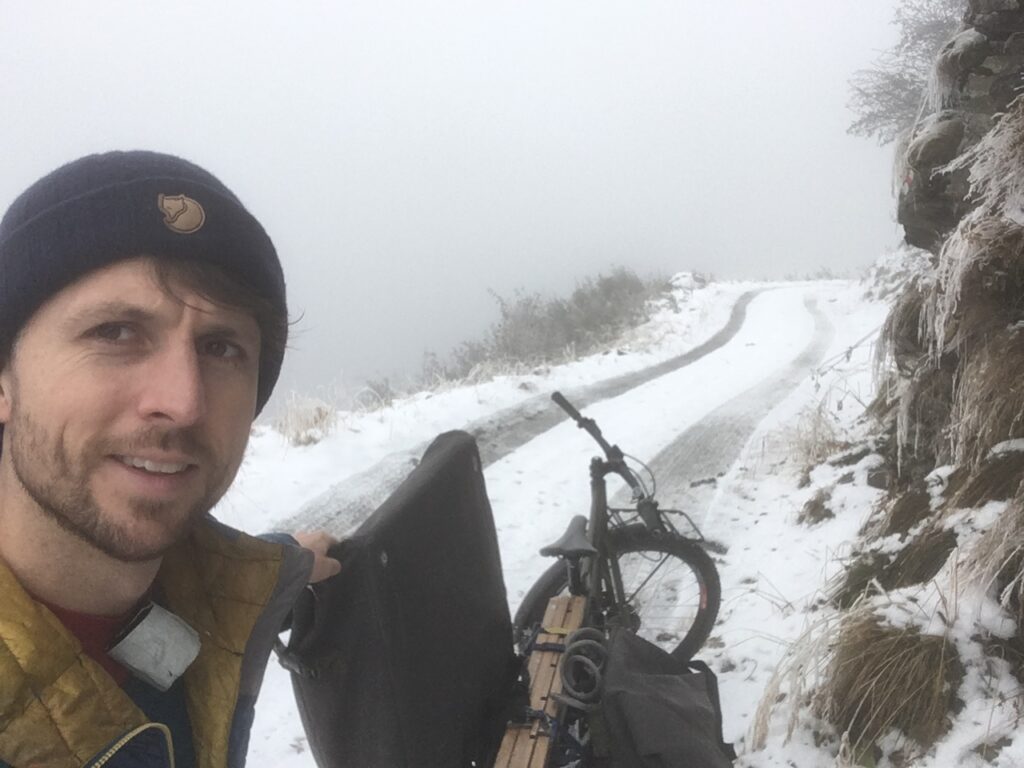 “The path upward is often underestimated, as is the inspiration awaiting you”

It’s a beautiful ride up the mountain to our first stop where I will leave the bike. About 2 hrs cycle up a small mountain track. Winding through autumnal views, the crunch of leaves under my tyres gradually turns to the crush of ice. The view becomes foggy and the road snowy. It’s a fantastic transformation signaling the first signs of Winter.
We leave the bike at a small farmhouse at the foot of the Dents du midi and continue by foot. After a special encounter with a chamois, we keep moving, always keeping our voices low. We are in a protected zone and the mating season has just ended so if we are lucky we are likely to see some more. We get lucky. A group of about twenty are clustered along a ridge in the snow about 25 metres away. Surrounded by fog and snow they are quite a sight, and not bothered by our presence at a distance.

I get quite a jump at one moment. Calmly hiking along a ridge with the cloud below me and a steep slope on my right. All of a sudden something flies like out of a snow hole in front of me clucking and flapping loudly. Julien later tells me they are Alpine Lagopèdes which I can’t wait to get another glimpse of. Quite peculiar, and we decide rather comically that they are best described as ‘flying snow chickens’.

Crampons on, and eventually ice axe out.  It’s not an extreme climb, but its an extremely long fall if you trip. With a heavy backpack, plenty of sharp rock and cliffs looming below best to take it steady.  Eventually I pop out of the cloud and the view is stunning.  I can’t see the route below me and have no idea what the last hour of the path looks like.  I haven’t seen the view below the ridges, but now all around me I begin to immerse from the cloud inversion and the mountains, scattered amongst this marshmallow like view were lit up pink and orange. 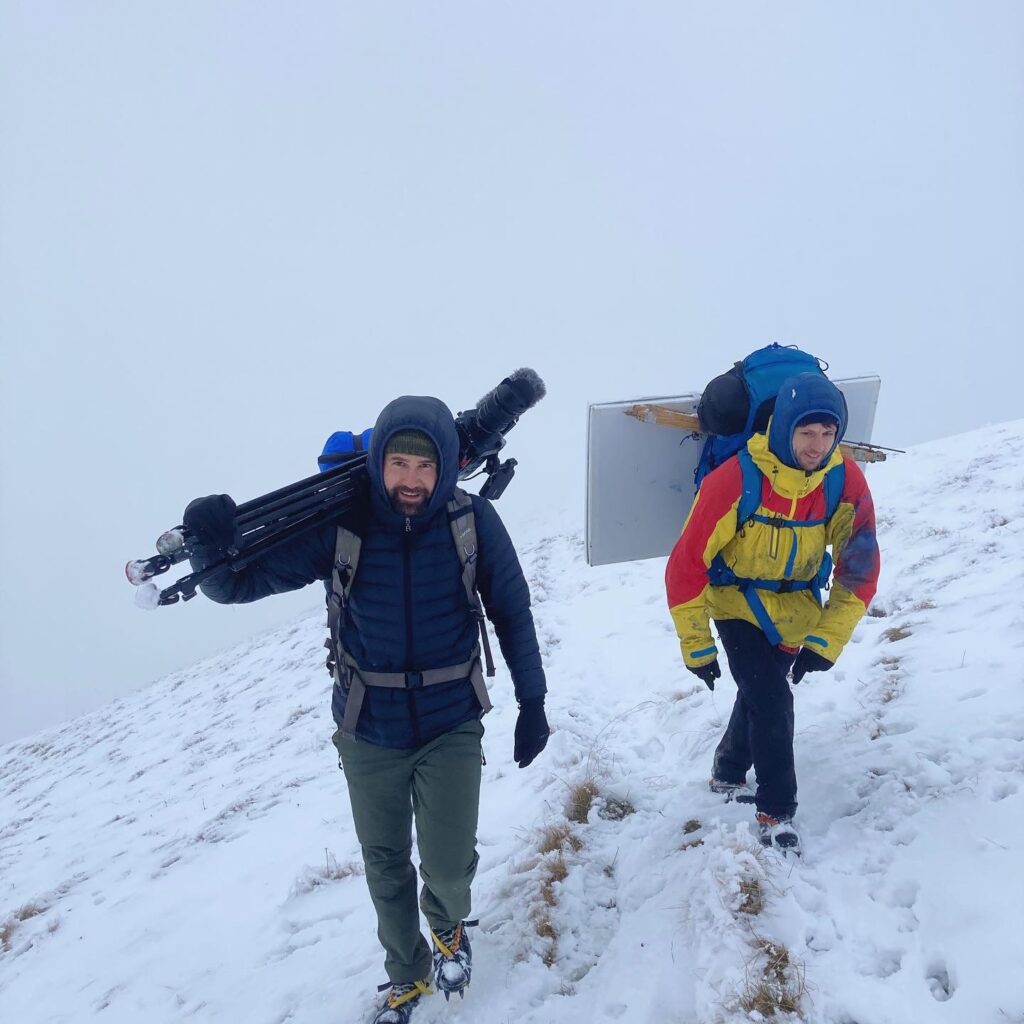 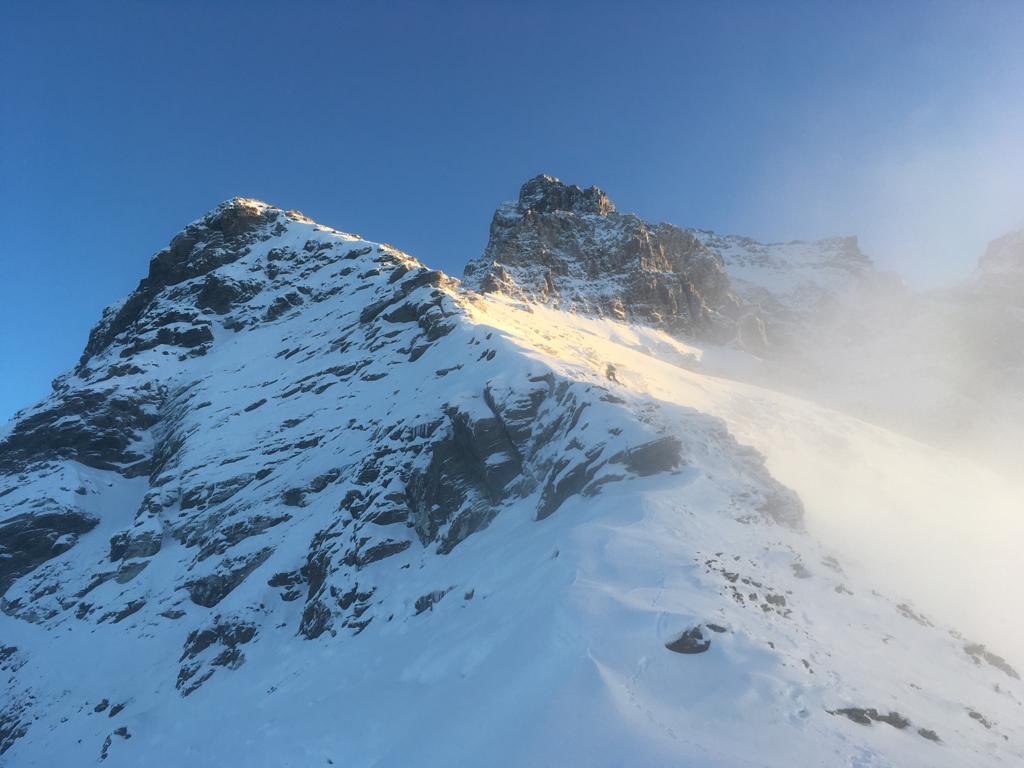 It’s late by the time we all eventually arrive at the cabin. We are pretty tired from filming and trudging through the snow but the view is energizing and we get the fire lit. We make some tea and get some food on the go. By the end of the trip, we are all going to smell like smoked sausage. The cabin is tiny and lighting the fire proves to be a smoky affair if you’re not careful. 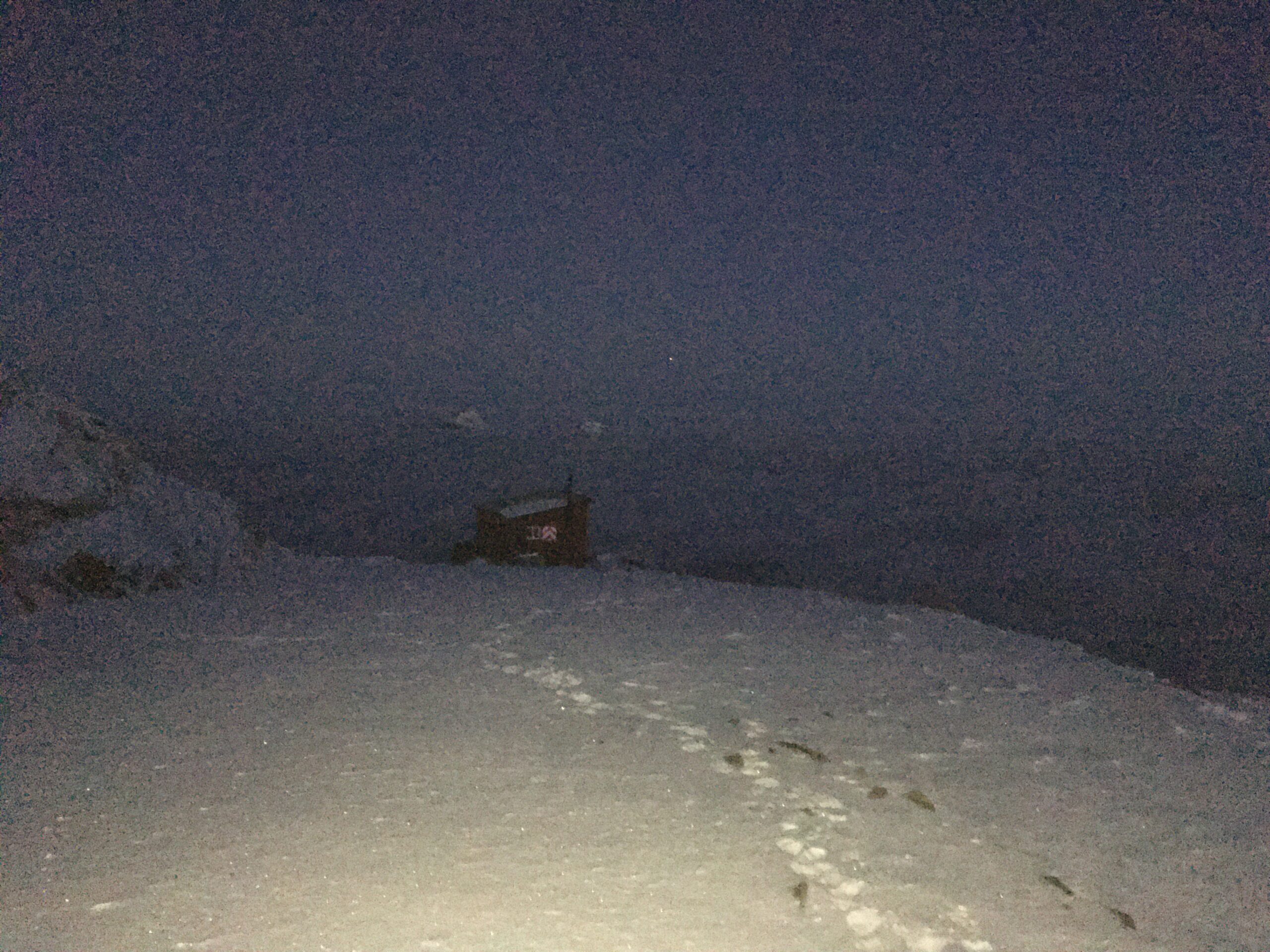 The cabin is small, apparently made to sleep 8. It’s tight enough with just the three of us though. Opposite the beds is the table (we are seated at in the photo below), along with a wood fire. The first night was quite hilarious after we lit the fire and dumped some good pieces of wood in it just before retiring to our sleeping bags. We were in for a cold night, of course.
After about 10 minutes we could hardly breathe. I was lying there wishing I had brought a cooler sleeping bag (bearing in mind the sleeping bags we have would keep us alive in a snow hole at -10 degrees). Little did I know the cabin must have been about 20degrees inside. After lying there for a while wondering if the others could breathe I heard a gasp and Julien and Jules couldn’t bear it any longer. We knocked open the chalet door to let some cold air in and we could breathe again, and sleep. 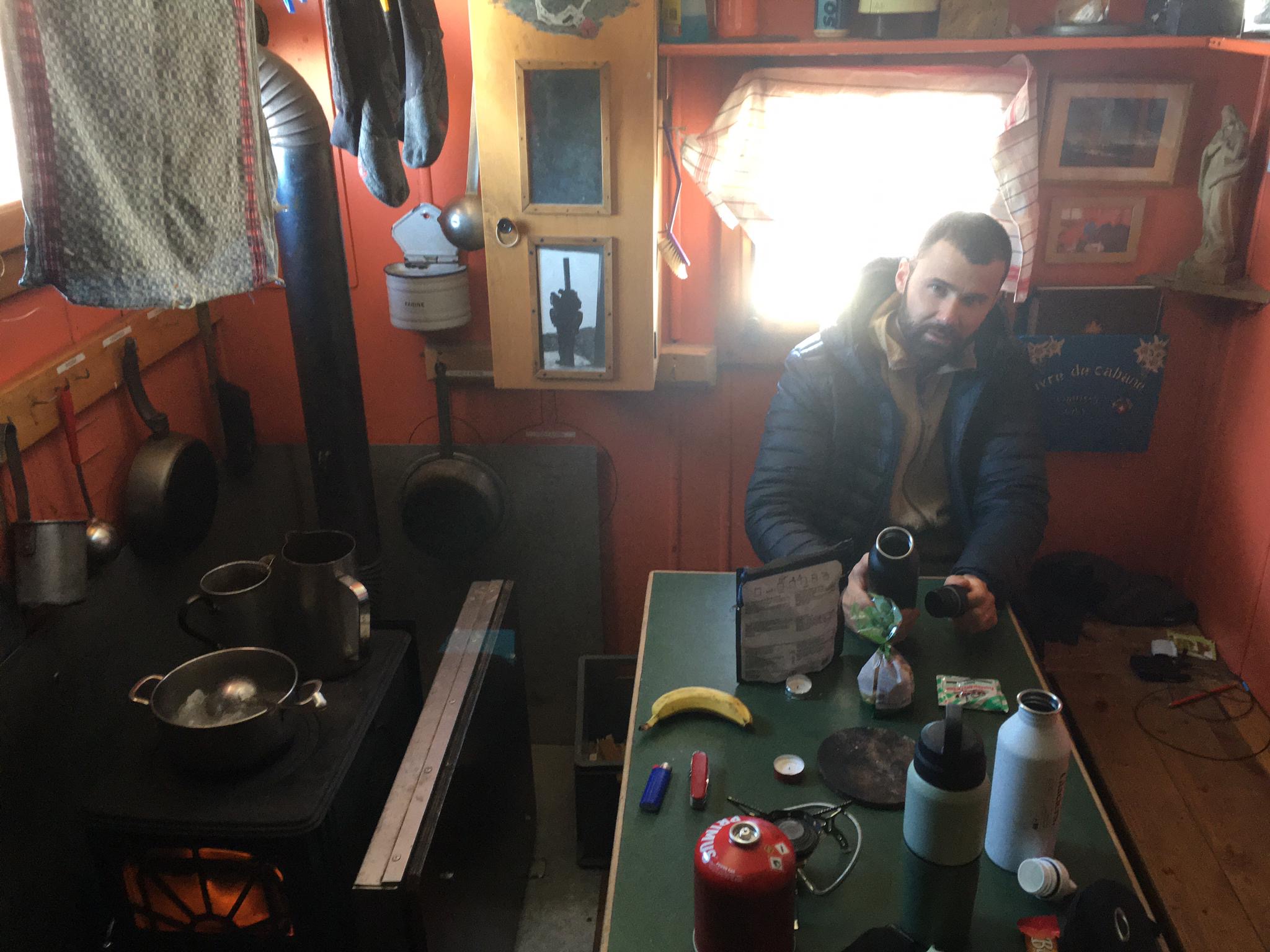 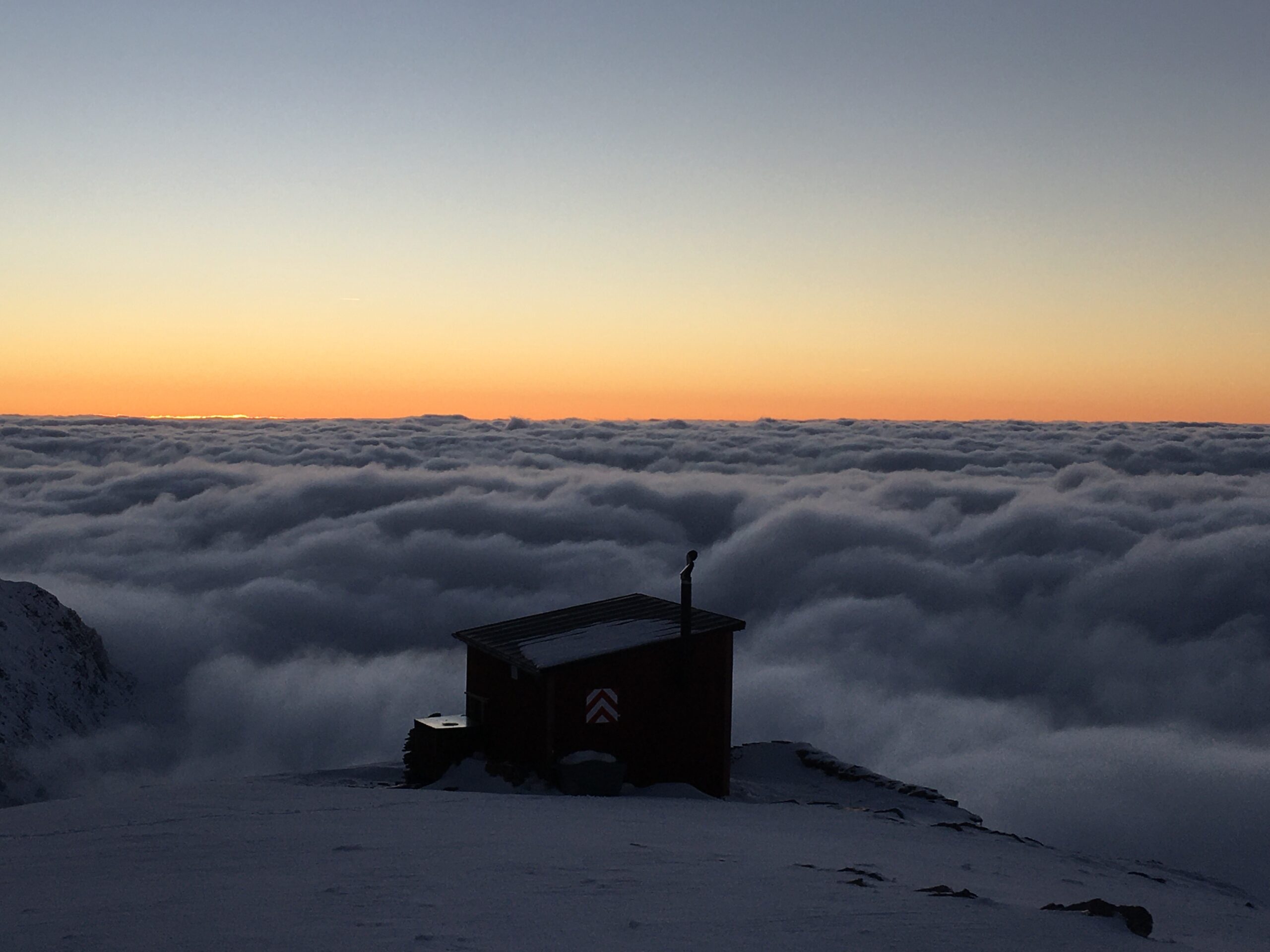 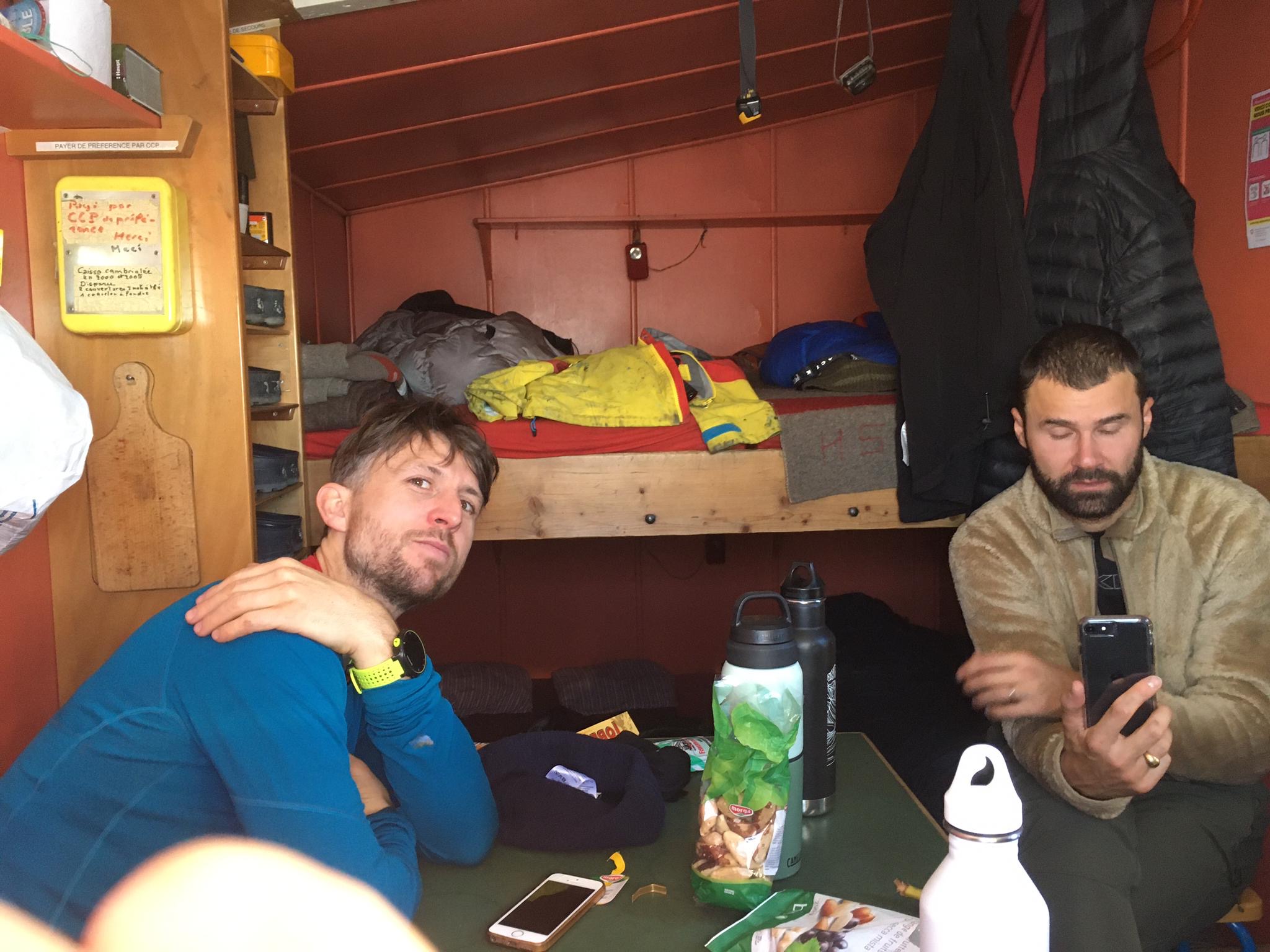 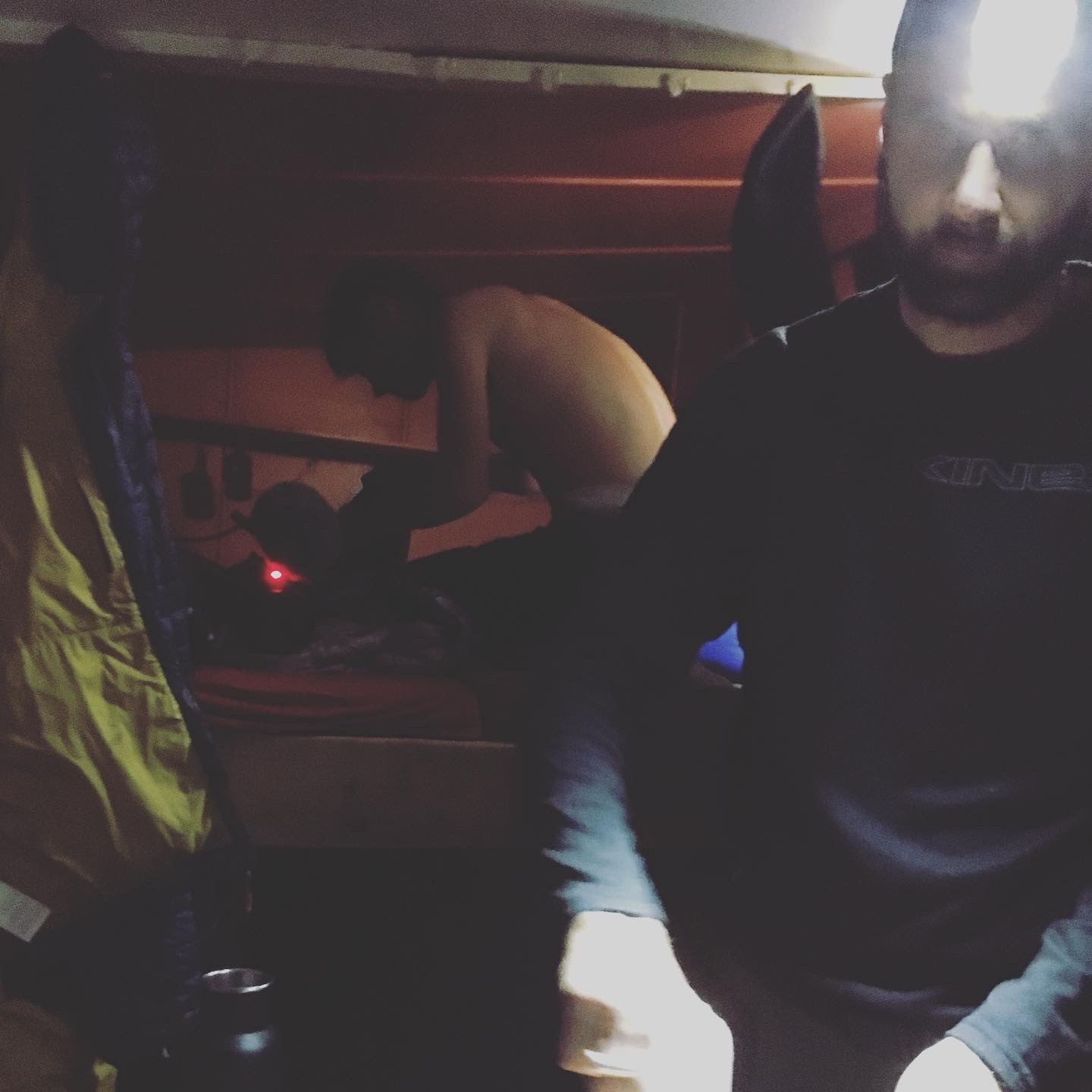 The morning is somewhat of a surprise. I have never been to this cabin before. Our ascent had been shrouded in clouds and eventual darkness. So opening the cabin door at 6 am to a magnificent sunrise with cloud inversion below and peaks emerging from underneath welcome surprise.

I’m instantly inspired to get going and set up the easel. The day proves to be a perfect one. We spend time drinking tea periodically, I start several paintings throughout the day with different light effects. Julien & Jules are working hard too. They have a limited time to get all the footage they need so, as I’m racing to catch the light, they also are running about.

We spend 3 days up at the cabin, painting, filming, drinking tea, eating sachet food along with dried sausage & some gruyere cheese. (Which I vow never to go hiking without again) I could write so much more, share many more photos and paintings. But actually, I would like to leave you in some suspense. Julien and Jules are currently busy working on the film. I can’t wait to see the final result and share it with you. 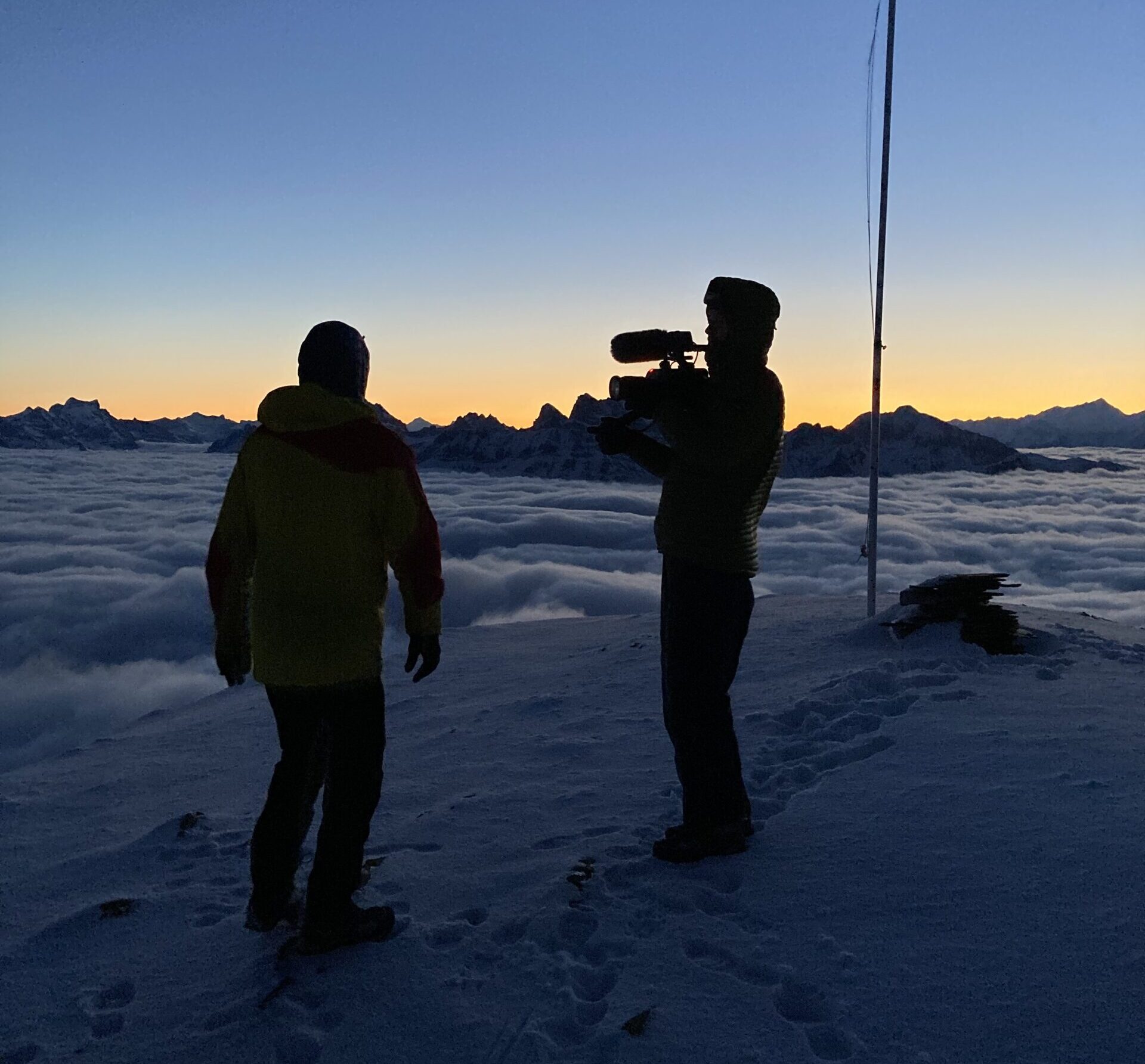 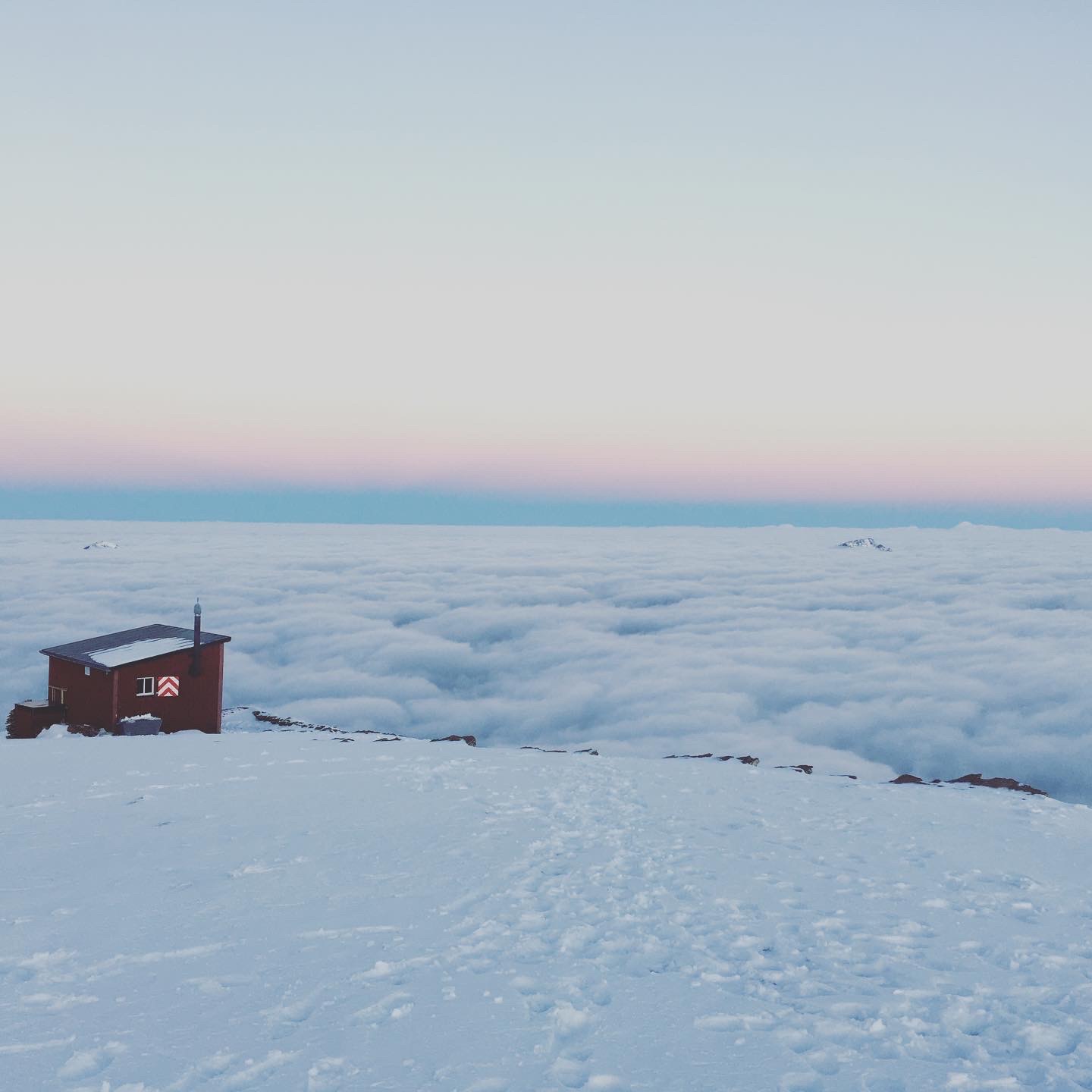 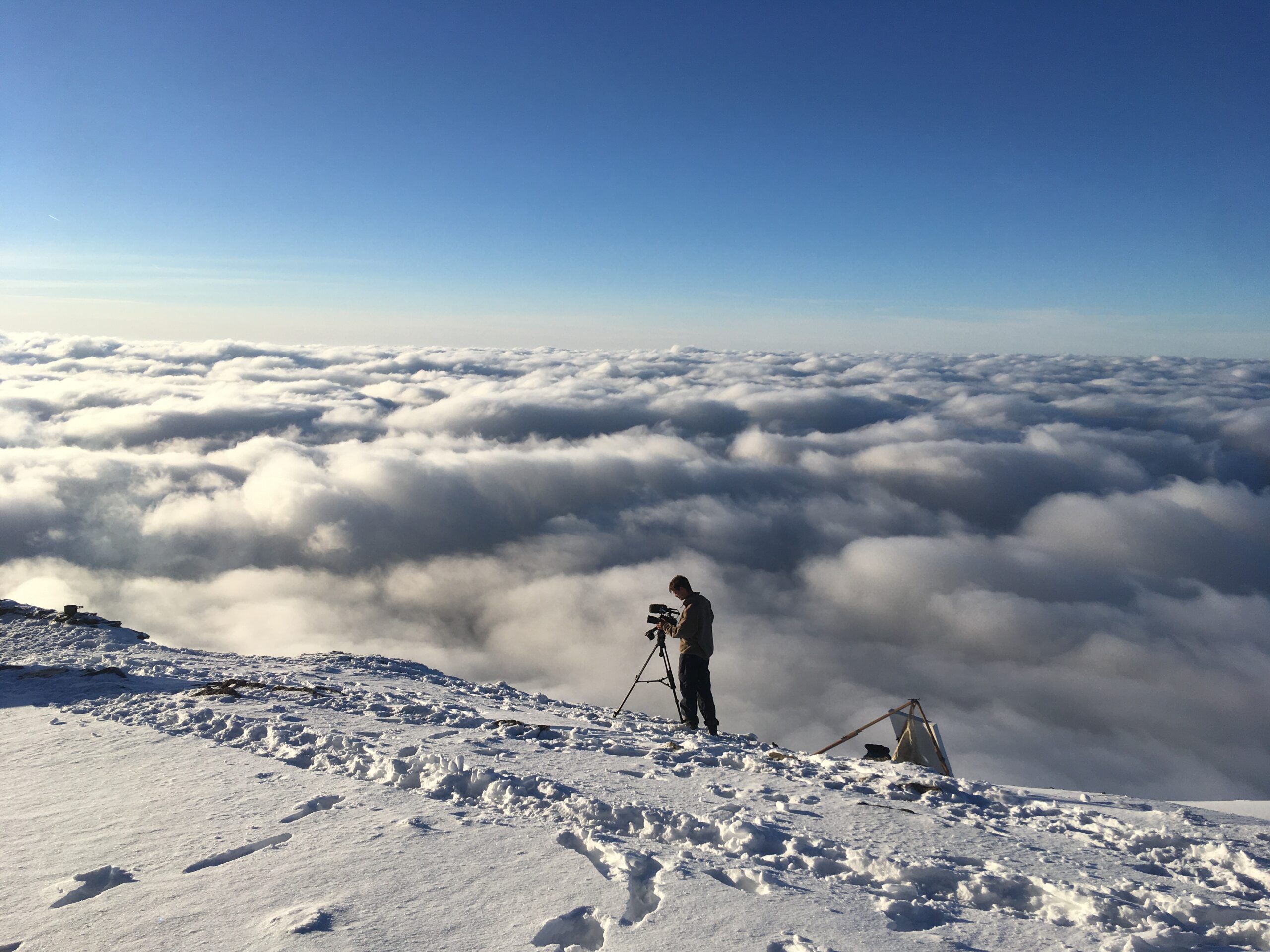 How to paint the mountains:

I’m not really going to give a tutorial here, just my approach. During this trip, the aim is to let myself be inspired and work with the changing scenery as we find it. Having not been here before it would be pointless to try anything else. I want to produce some works which best describes our trip. The goosebumps you get as you come out of the cabin with the sun rising for the first time. The depth and mystery of the clouds looming below. There is so much to choose from.

In this case, for my main painting, I’m inspired not by the mountain (The Dents du Midi), but by its cast shadow cast on the sea of cloud below. I often find that after a long hike in the mountains, that the view and isn’t what I expected. In this situation, I try not to have a preconceived idea of what I want to paint. To let myself be inspired by each moment experienced is the goal

Below is a sneak peek of the paintings in progress. The second painting is inspired by something I have never seen before. It is called the ‘Apollo – St-Michel axis’. About fifty years ago, Jean Richer wrote a very interesting book in which he describes alignments of temples and asks himself “how did the ancients know how to build edifices so perfectly aligned over several hundred kilometers? He describes a line passing through Delphi (and its Pythia, dedicated to the solar god Apollo), Athens, and Delos (where Apollo was born) which he calls the Apollo line. Ten years later, his brother Julien resumed his work and realized that this line extended much further, towards Europe. This line which originates at Mont-Carmel in fact stretches all the way to the archipelago of the Skellig Islands.
According to a very interesting article on this subject by Fabien Avanthey, the Haut Cime, until the 17th Century was in fact named ‘Le Mont-St – Michel’! And looking at the map of this sacred line, if you were to lay it over modern-day google maps you will find that it does in fact pass exactly over the Dents du Midi. 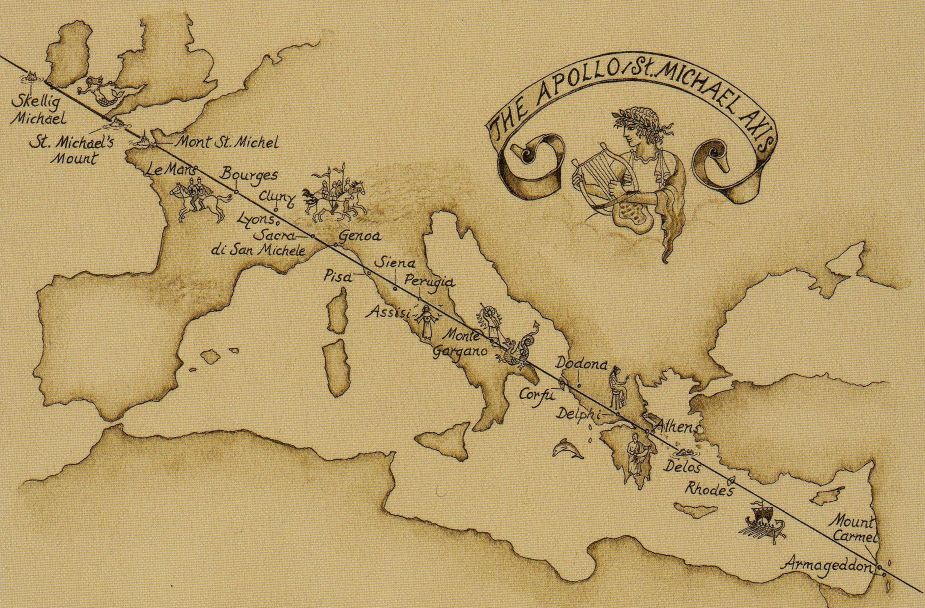 Julien had told me about this theory on the climb up. But what we noticed over the next few days was possibly even more spectacular than we had imagined. That is, that throughout the day there is a constant circular rainbow effect in the shadow of this particular peak(the Haut Cime).

As you can see in the photo below, the entire shadow of the Dents du midi appears on the clouds below, but the rainbow appears only alongside the ‘Haut Cime’.  This effect remained through the whole day as the shadows moved over the valley below.  To add to this mystery, the next day the clouds dispersed and we eventually had a view of the entire valley floor.  But there it was.  In the same place as the previous day,  the autumnal colours were decisively more saturated and tinted.  It is clear to see from being up there that anyone in ancient history, or even today, could be persuaded of this mountain’s sacred energy. 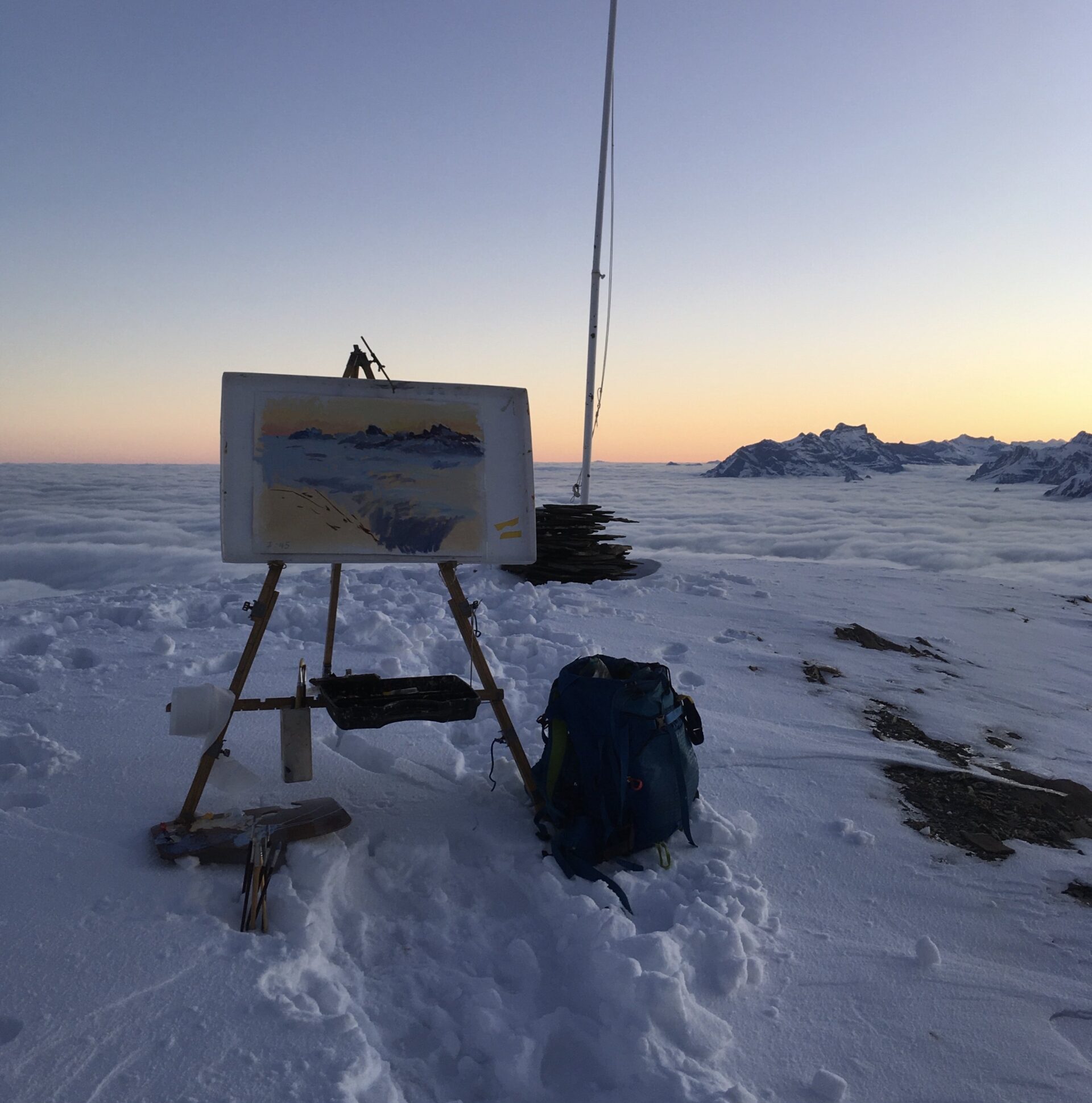 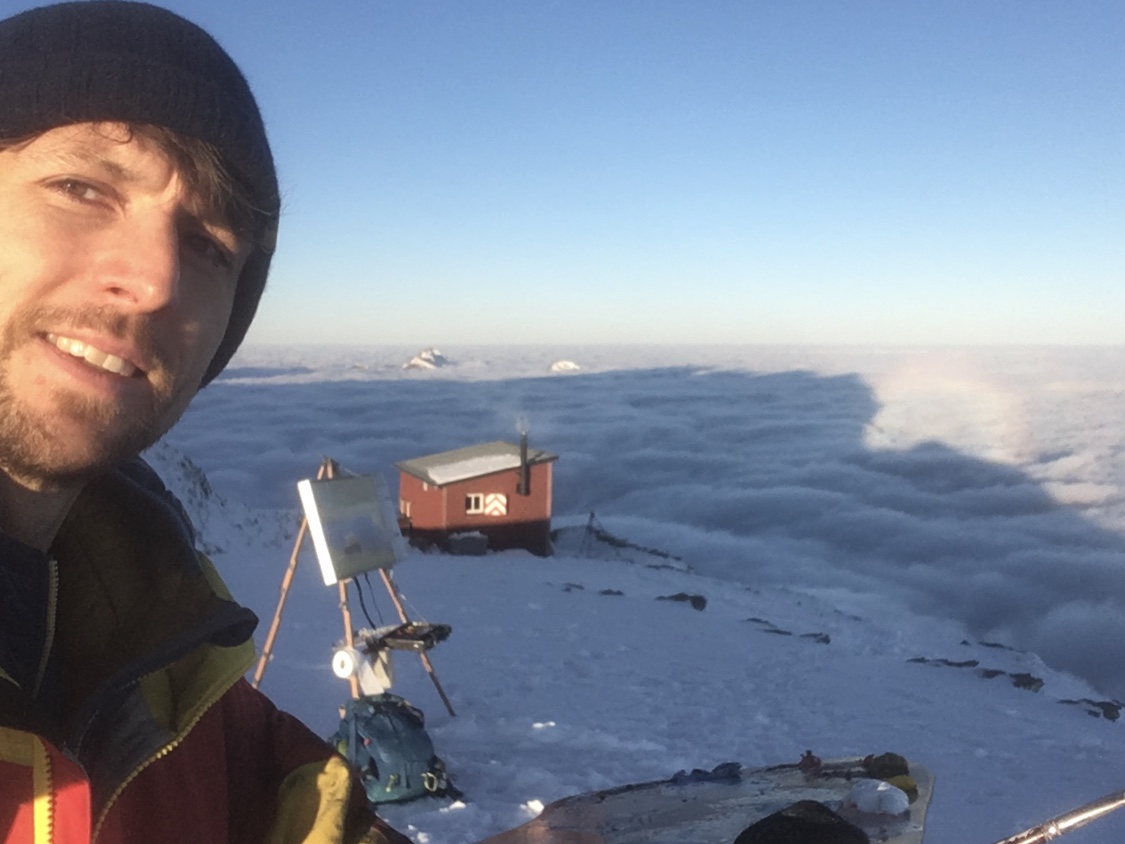 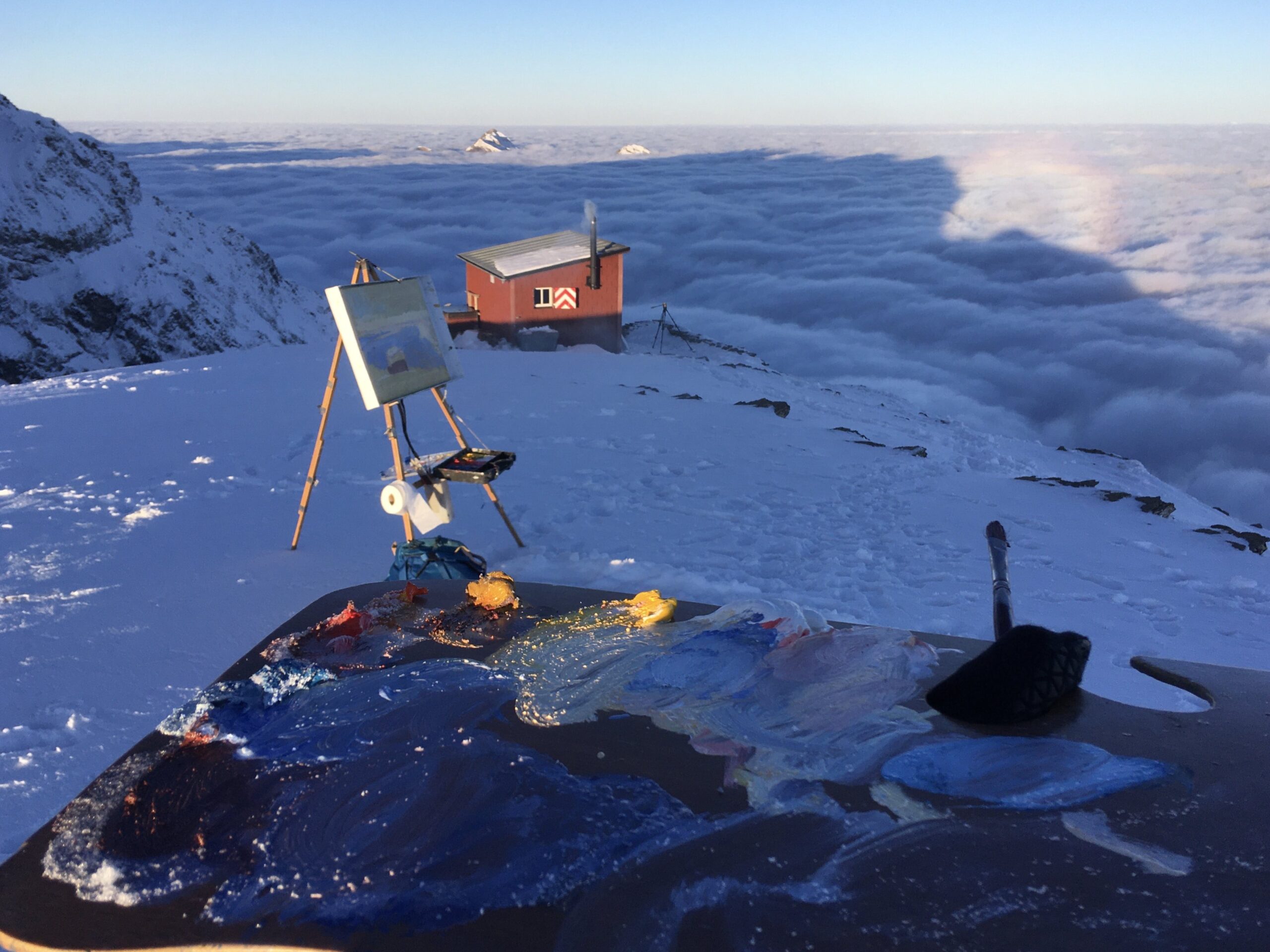 having not seen most of the ascension due to the cloud cover the descent was a discovery in itself.  Again I’m very happy to have my crampons, with my large bag it would have been impossible without them. Now on the way down, we can see the path with all its exposure, rocks, and cliffs. As is often the case, I have this feeling upon leaving that I want to stay a few more days to explore. It will have to wait for another day, another season perhaps. With 2 new paintings and a couple of sketches, I can descend happily, let my dry lips & sore feet recover and even take a wash. What a luxury!

Thank you to Jules & Julien for the good times and I can’t wait to see their film and share it with you. The exhibition and film will preview on the 16th of January 2021.

Please subscribe to the Easel Editorial to receive exhibition invites and all the latest news along with much more.