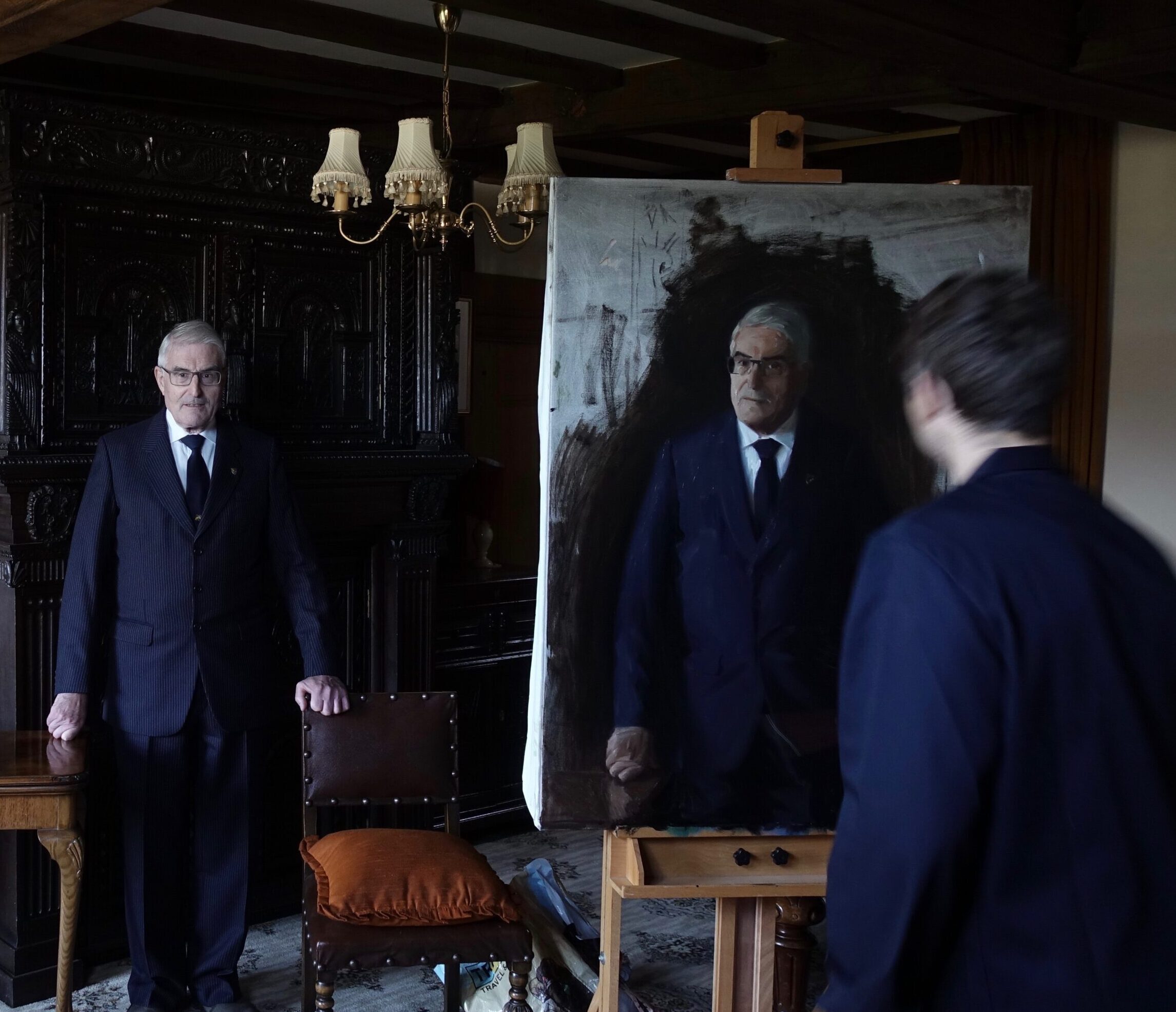 For many a portrait artist, the main inspiration is light. The beauty of a great painting is often found in the artist’s study of chiaroscuro. Take portrait artist Rembrandt for example, Vermeer & Monet, too. They all depicted light in their own way but what remains constant is that the lighting within their paintings is often the first most striking element pulling us in to look further.

This is not to say that it is the only important factor, by a long way. But it can well be the undoing of an otherwise good composition.
So with that in mind, I do my utmost to paint portraits at the studio where I can. However, sometimes exceptions can be made and it is not always convenient for a sitter to travel far.
For this latest portrait commission, we have decided to paint at Trewern Hall. A magnificent 15th Century Timber framed grade II Listed Country house in Mid Wales, UK. It’s poignant not just because it is the sitter’s childhood home, but also his father’s and grandfather’s too. In light of this, we would like to have some aspect of the home in the painting, so naturally, this is more easily done at the home than at my studio. 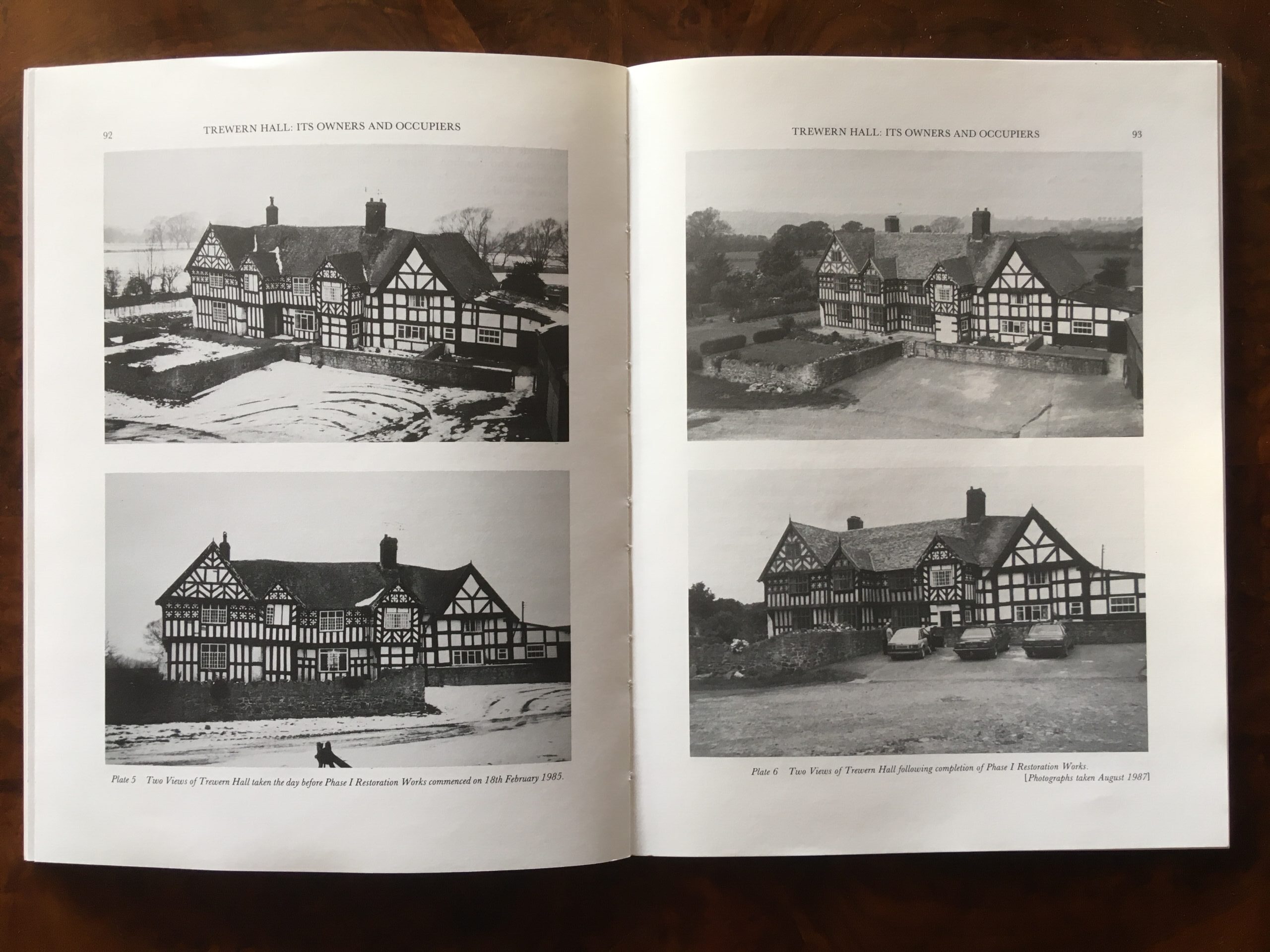 Upon arrival, we took some time. A few mornings to be exact, to make sketches and find a suitable place to paint. As well as light, I really need ample distance to stand back from the easel and model whilst painting. Without this, the proportions and overall harmony of the image are awfully difficult to realize.
Once some pencil sketches have been made we select a few favorites and I test them out on a miniature scale in color. After a day of painting these small studies attached to a board, I left them flat on the floor, to make sure they wouldn’t fall face-down and get ruined.
On returning in the morning I found the sketches had been mutilated. Upon closer inspection, I discover some rather telling footprints around the edges. It appears that a mouse had visited in the night and danced his way all over two of them. Thus turning the sketch into something more like pointillism. See the image below(left) along with the tiny footprints on the black tape! 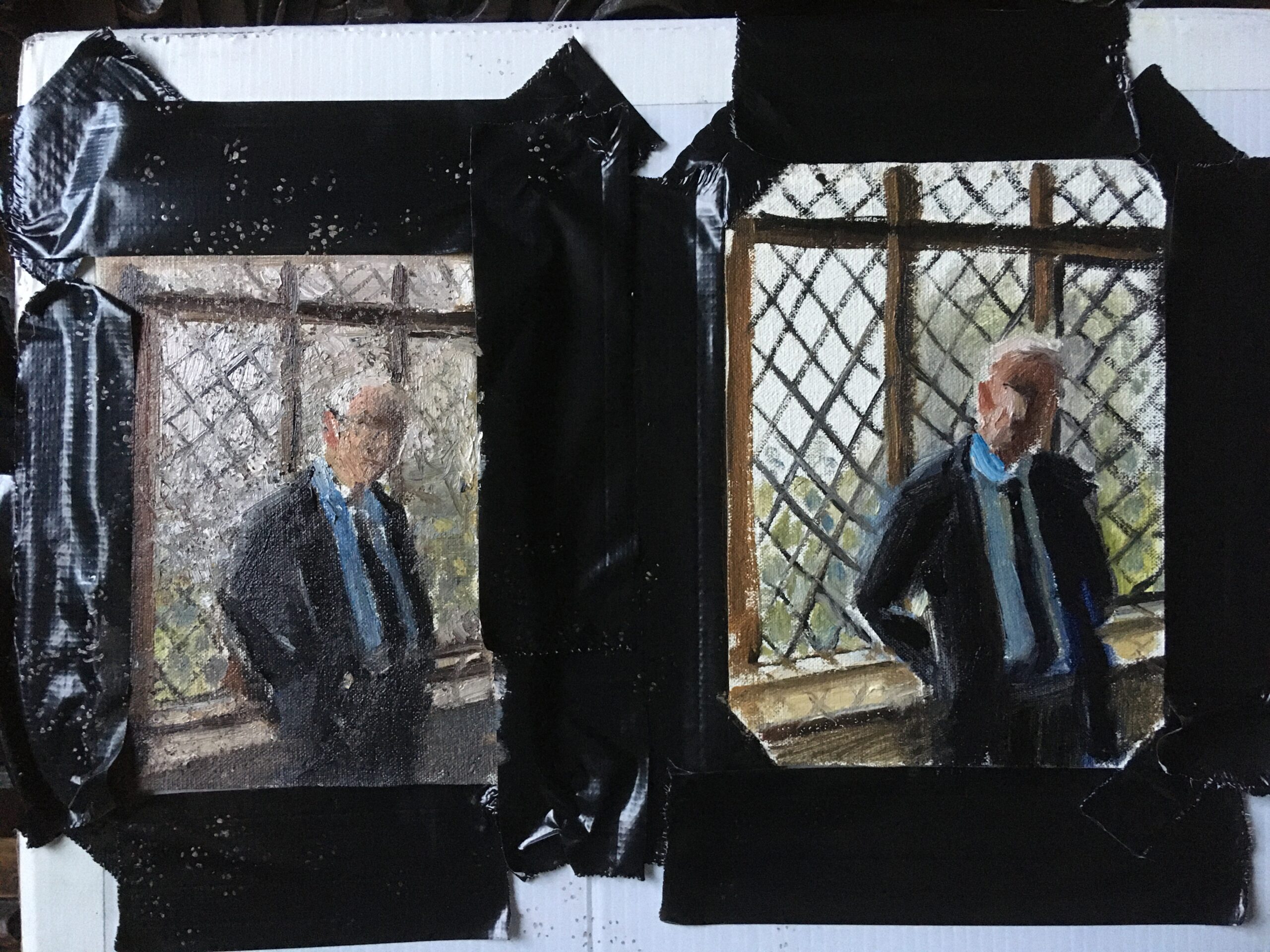 Portrait artist – tools of the trade:

Two things I wouldn’t paint a portrait without are my plumb line and mirror. The vertical line can be terribly deceiving, as though your eyes want to place things on a vertical line, even when it is not all that vertical. The use of the plumb line is to verify and map out some vertical reference points, ie; the tip of the nose, the edge of the chin, and one side of the tie. By finding these points you automatically find fixed references and can arrive at a posture. These points can also then be referred back to and checked throughout the painting.
The Mirror serves by flipping everything, either vertically or laterally. Objects or features appear a little more abstract than usual and mistakes in angles, tone, and color seem to jump out at you helping you to decide what to fix next. 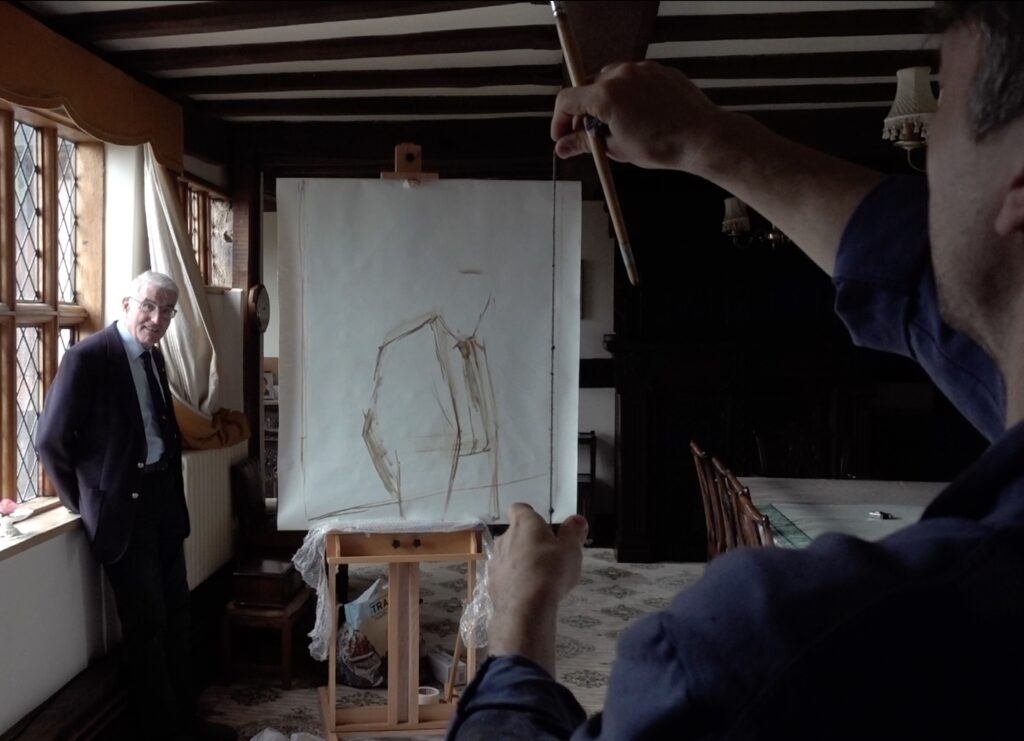 Otherwise known as scraping off, re-painting, starting again, etc etc. This doesn’t always happen but in this case, I had not fully realized the consequences of having my canvas slightly less than perpendicular to the light source(the window). As the portrait developed into what turned out to be a lovely composition I realized that I would not be able to continue with the portrait. There was just too much contrast between the window and the face. Although it would have made a good study of a scene, the face would not have reached a quality I could have been happy with due to the low amount of light on my easel and also the model.
So, I slept on it and decided to start again the morning after. After four sittings it was quite difficult to wipe off all the work but I knew I could start again with hindsight and learn from my mistake.

A Fresh start and a photographic portrait artist

Murray has written extensive histories (1988, volume 76) of the house and amongst these many books is one with a portrait of his grandfather Evan Chapman. The portrait was taken in Fred Anderson’s studio, down the road from their home in Welshpool, now occupied by his grandson Ian Anderson where he deals in Antiques (who incidentally is a friend of Murray). This portrait(below) was taken at the time when Murray’s grandfather was the proprietor of the house and we thought it would be rather fitting to paint something inspired by this fine photo taken many years ago.

We will not stick rigidly to the photo but you can see the photo here below and will see as the painting progresses we end up with the same pose but the natural stance that we take up is slightly different, as are most people’s postures. 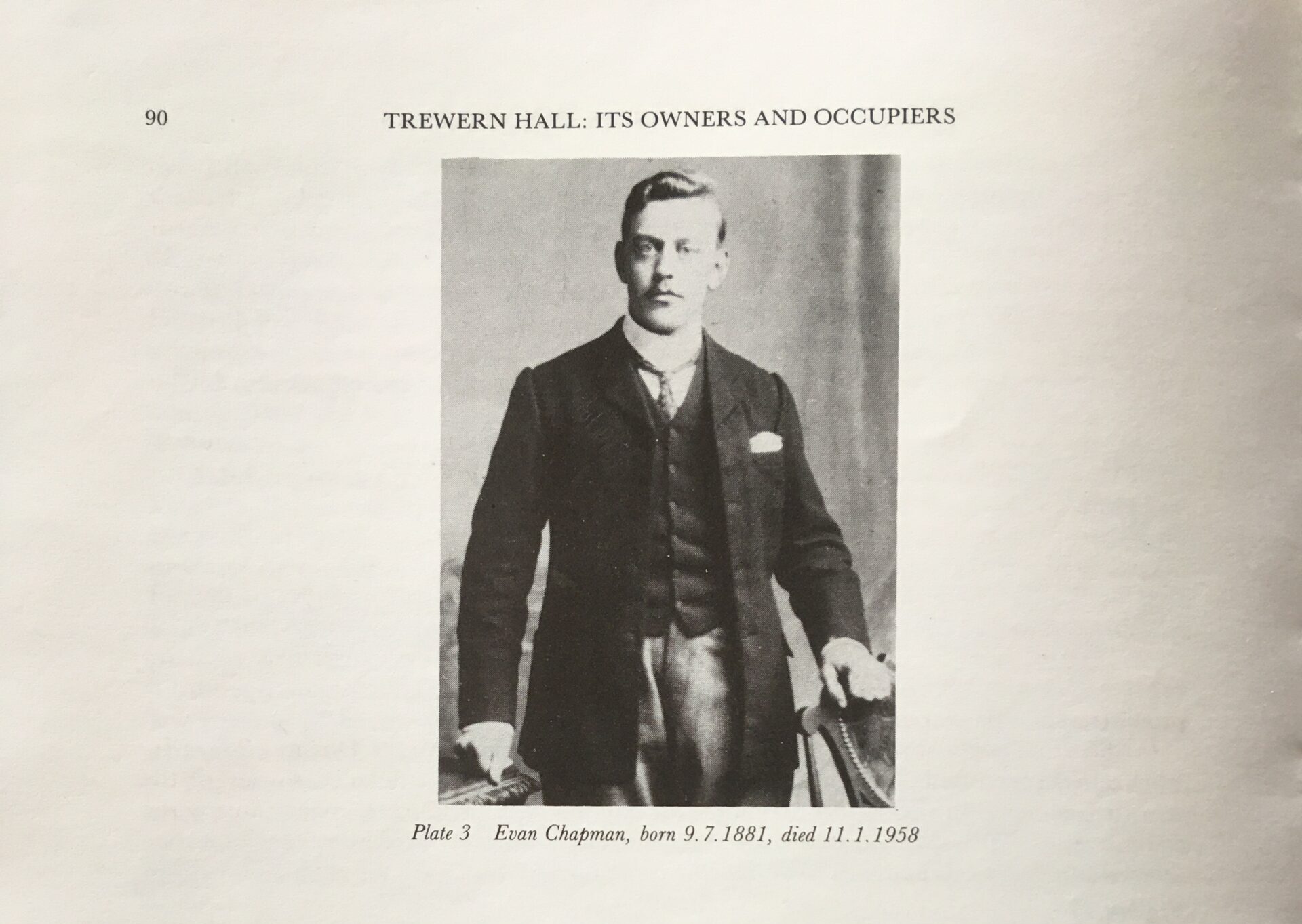 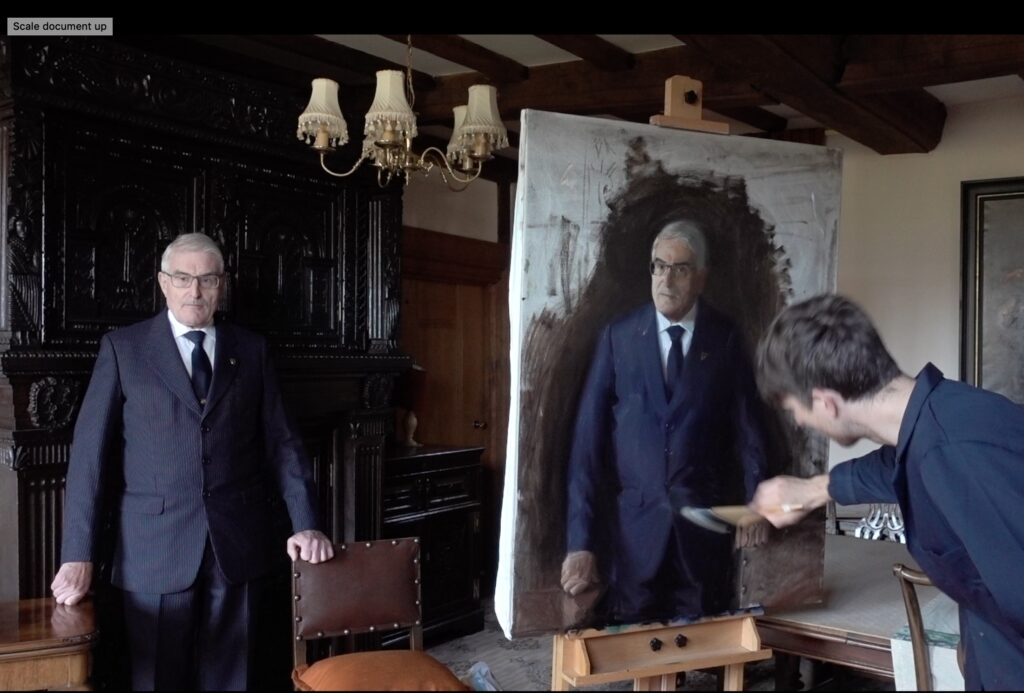 As the sitter, you are privy to seeing the portrait develop throughout the sittings. So here I’m sharing a few pictures of the development, which you would otherwise not see without scanning the painting. In this case, if you were to do so you would find some outlines of Murray from the previous attempt, turned upside-down.

After a few more sessions painting the hands I soon get started on the background with the large cupboard behind Murray.  This piece of furniture was purchased from Lymore hall.  Lymore was a huge timber-framed mansion, one of the last built in England and Wales. Completed in 1675 for Edward, third Lord Herbert of Chirbury to replace the house located in the middle ward of Montgomery Castle which was destroyed in 1649 following the Civil War. In August 1921 the floor collapsed during a Bazaar Sale.  Everyone seemed to escape with just a few scratches but the hall was finally demolished in the 1931. Subsequently, many of the interior parts sold, including a huge staircase! Which incidentally was bought temporarily by Fred E. Anderson before he sold it on. Needless to say, it’s a small world. 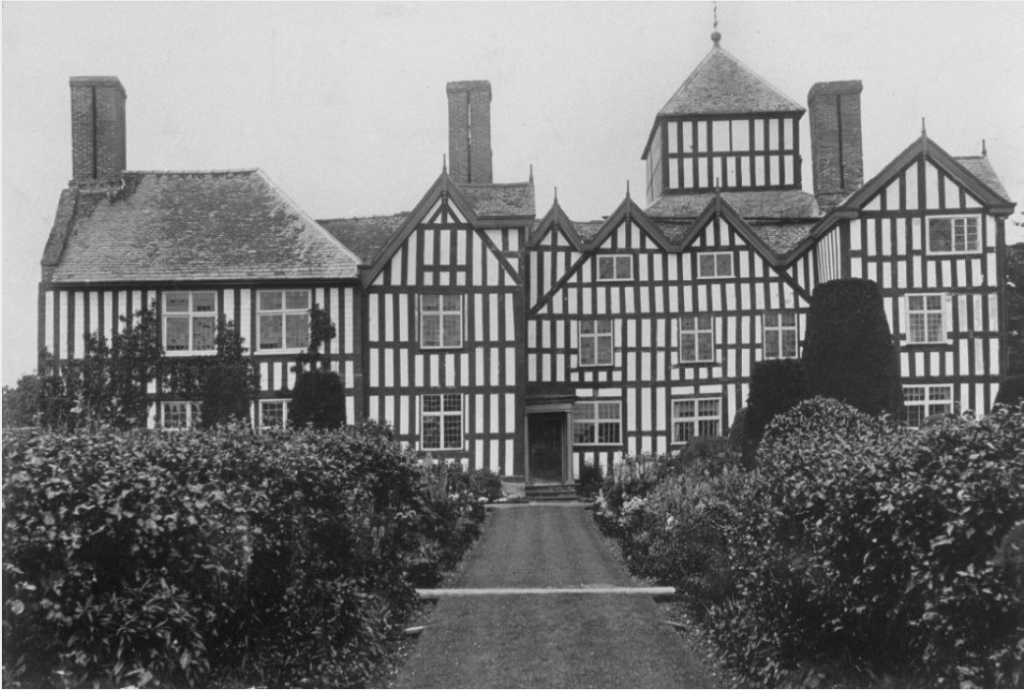 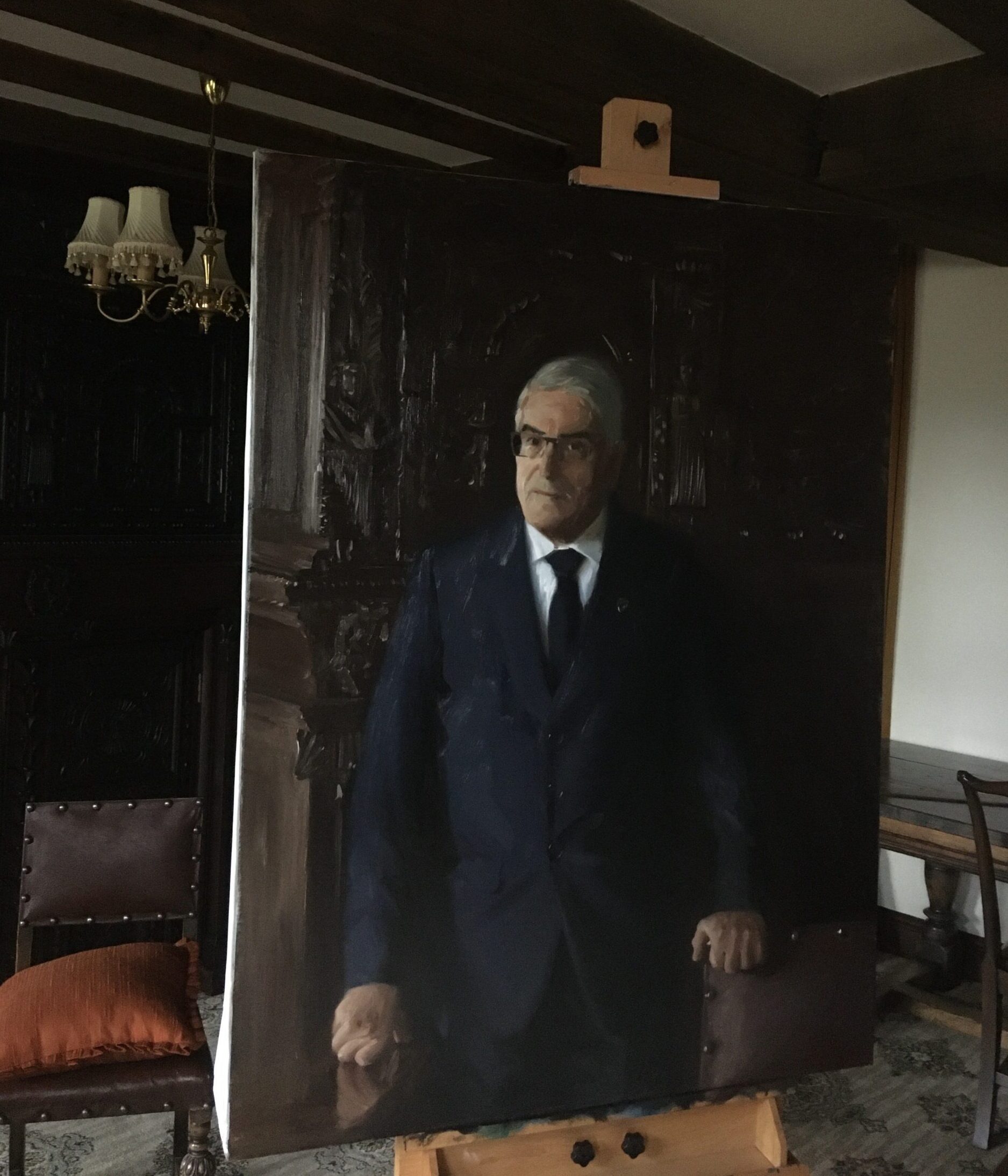 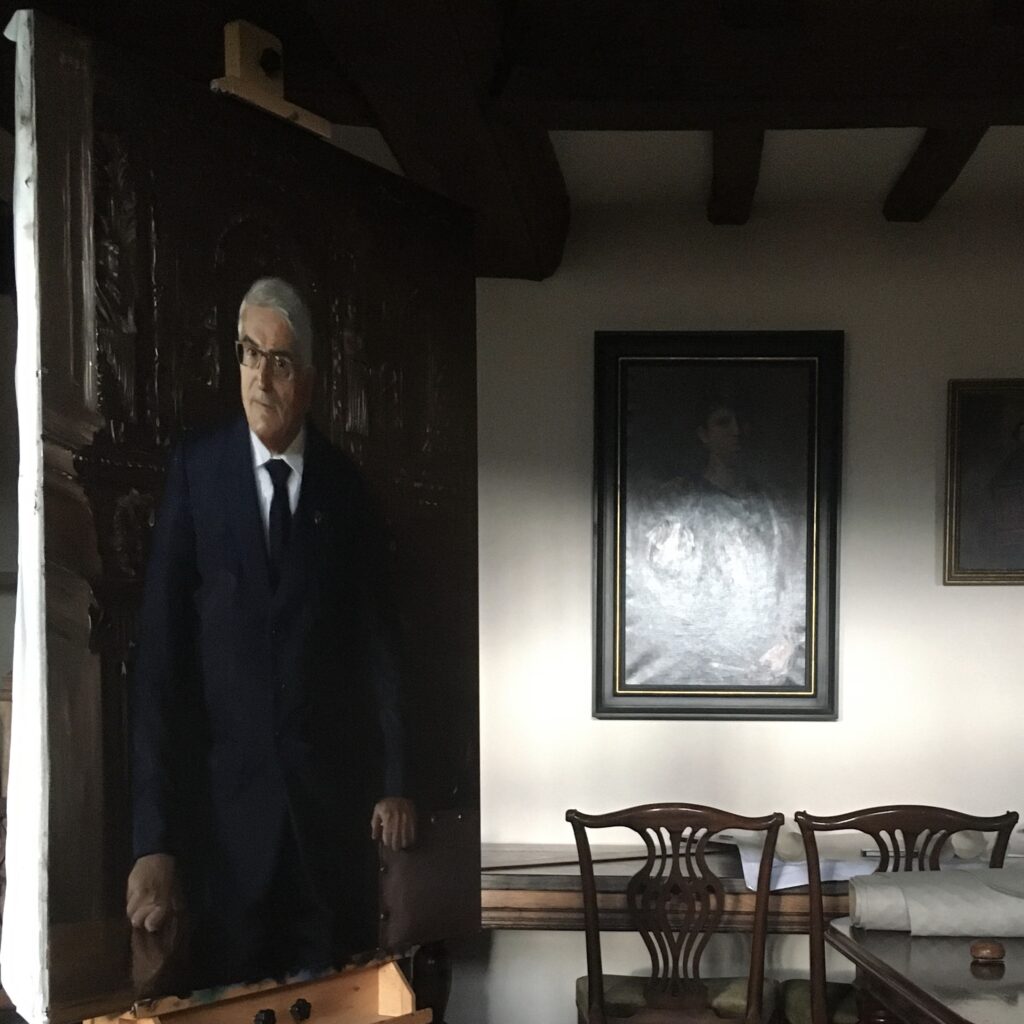 Here you can see the finished portrait in situ before being stored for drying and then taken to the framers. To see the final image once it has been uploaded just head to the portrait gallery