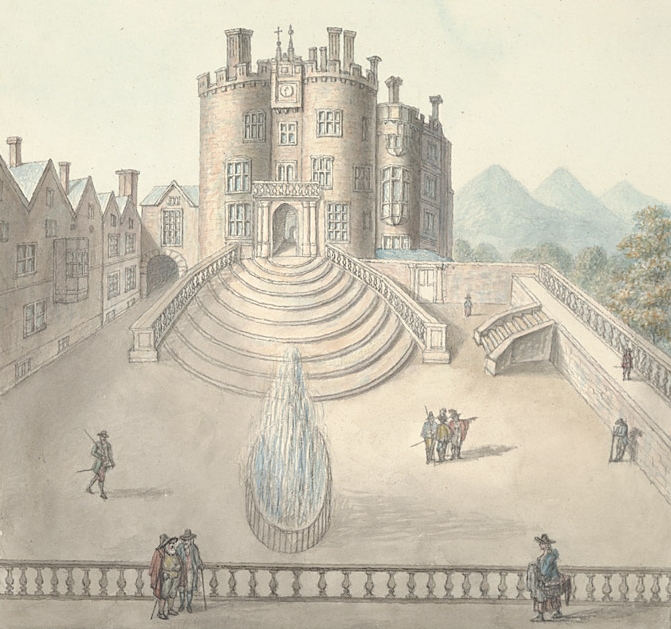 A Welsh Prince built Powis Castle in the thirteenth century. Following the end of the Welsh Wars (1282) and for his loyalty to Edward I, the King permitted Gruffydd ap Gwenwynwyn to begin building Powis Castle circa 1283.    Lord Powis (Edward Grey) took possession of the whole castle In the 1530s, and started the process of re-building it.

In 1578, Powis Castle was leased to Sir Edward Herbert, 2nd son of the Earl of Pembroke and Anne Parr (sister to Catherine Parr, the sixth wife of King Henry VIII). In 1587, he purchased the whole castle and estate outright. From then onwards generations of Herberts transformed Powis from a fortress into a manor house – a beautiful and comfortable home. Each generation gradually adding to the collection of paintings, sculptures, furniture and tapestries.  In 1952 George Herbert, 4th Earl of Powis, bequeathed the castle and gardens to the National Trust. 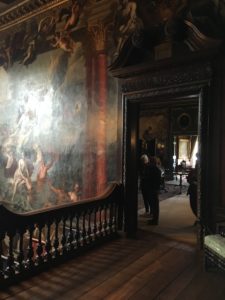 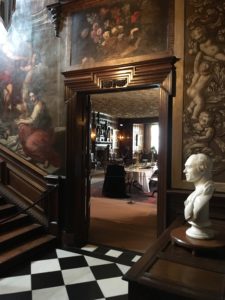 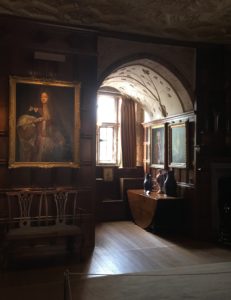 This commission brings a unique experience indeed. I am following in in the footsteps of some the greatest portrait artists of their respective times. Around the Castle hang works by Sir Joshua Reynolds, George Romney, Thomas Gainsborough RA, & J. S Sargent. All of these, previous commissions made by the family through the generations past.  Just like the one I am undertaking here.

In 2017 I had the great pleasure of being commissioned to paint Jonathan Herbert, Viscount Clive’s Portrait.  Jonathan (Johnny) is the Heir to the Earl of Powis (his father being the 8th Earl) Their family history is absolutely fascinating and I can fully recommend a visit to the Castle if you have not already been.  A more depth history of the Castle can be found here.
Painting Johnny Herbert was my first notable commission after finishing school in Florence and I feel fortunate that locals like the Herbert family wish to support artists such as myself.

Early on we decided that the portrait should remain traditional, with a somewhat informal feel.  This was made easy due to Johnny’s easy going, fun character.  As we painted our way through sittings, the informality came through naturally.  Although currently living in Wales, Johnny spent his early childhood and twenties living in Canada, from which he has many fond memories.  To add this more personal touch within the painting the background depicts one of his favourite canoeing and camping locations (Algonquin Provincial Park, Northern Ontario).    More often than not I gain a friend when I paint a portrait and this was no exception.   To see the full painting just click the image below. 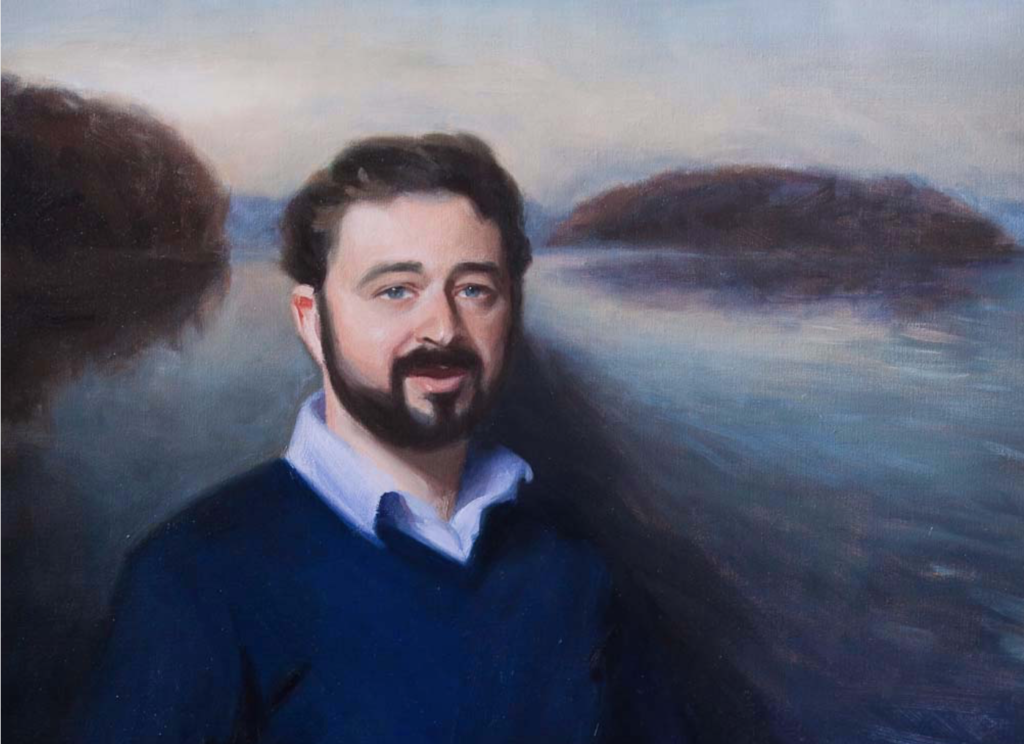 As this commission was going on my interest in Powis Castle naturally began to take off.
When I heard that there was a one-off portrait show at the Castle I went for a visit.  A you walk in the first piece to greet you was a charcoal by  J. S. Sargent.  Sargent is one of my favourite artists, so I was excited to find this so close to home.  At the time he completed this portrait he had more or less stopped painting commissions.   Avoiding portraiture and preferring to paint scenes or ‘non-commissioned works’.  I therefore imagine this charcoal reflects a special connection and friendship between himself and the family at the castle.  I enquired with the National Trust to see if they would let me set up and make a copy of the charcoal.

Making a master copy is quite similar to the process of drawing a portrait from life, although the temptation when making copies is to try and reproduce the final result from the get go.  To make a true copy one should try as best as possible consider the method and mindset of the artist in question.  To study the layering and predict the order in which the artist worked. Examining brush work carefully to replicate their direction. To see how they manipulate the mark making , maybe with a finger or a cloth etc etc.

Many thanks to the team at Powys Castle for their kind hospitality. 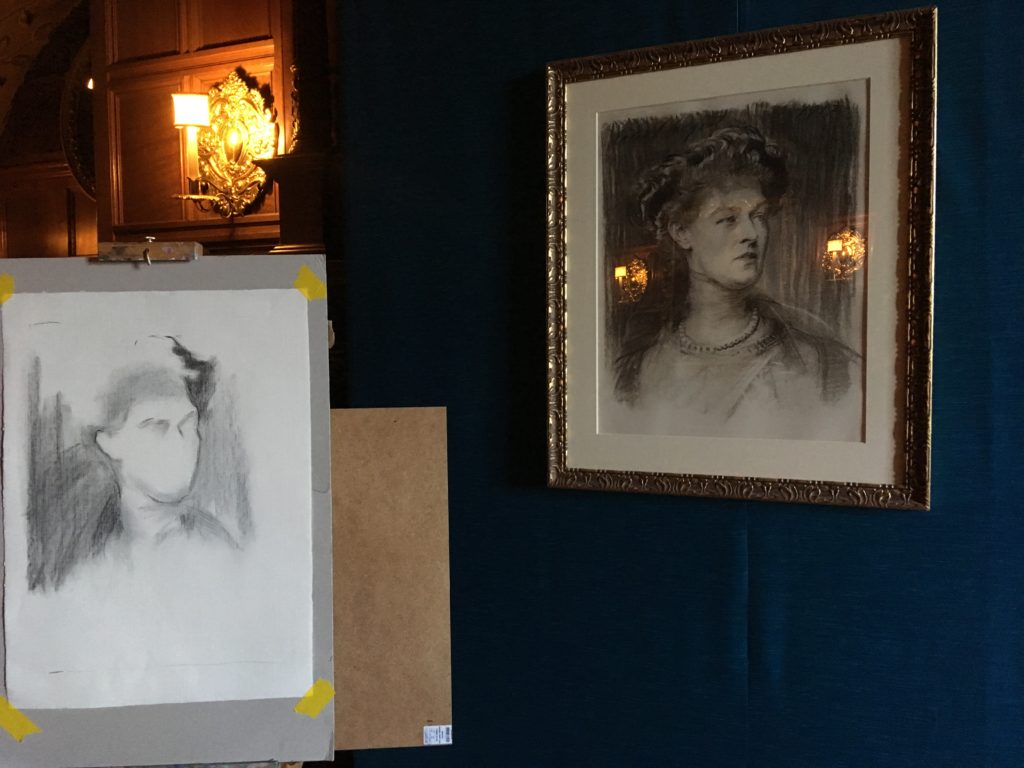 making a master copy. Initial laying out of the shape 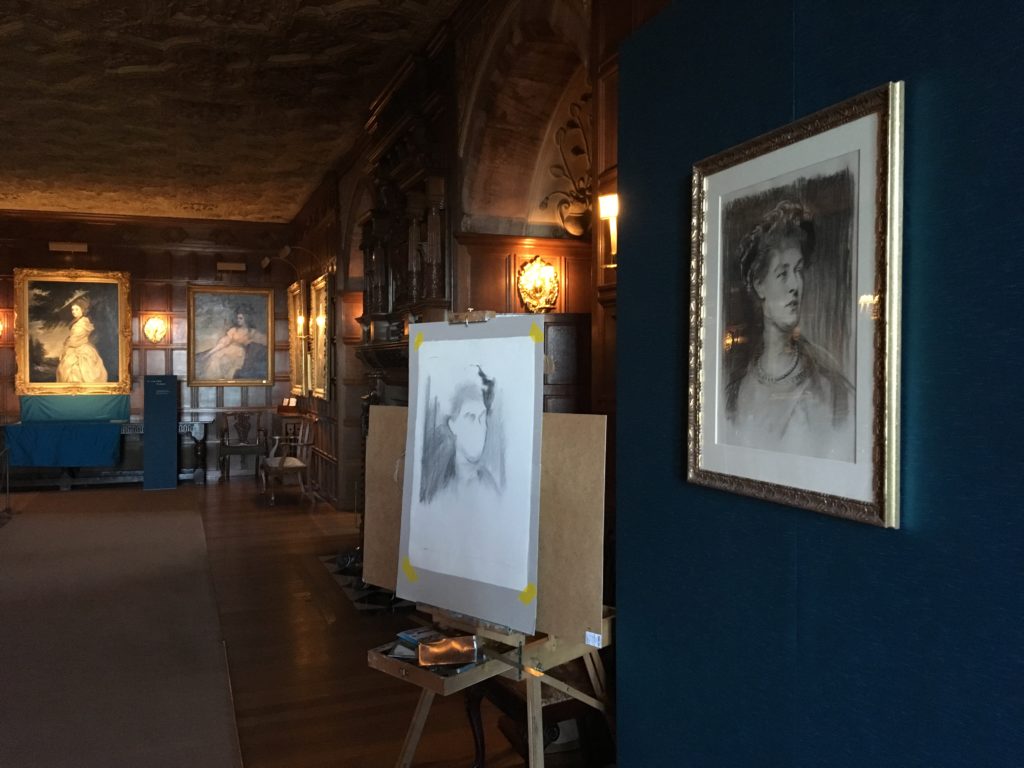 The set up, with Romney & Reynolds portraits in the background 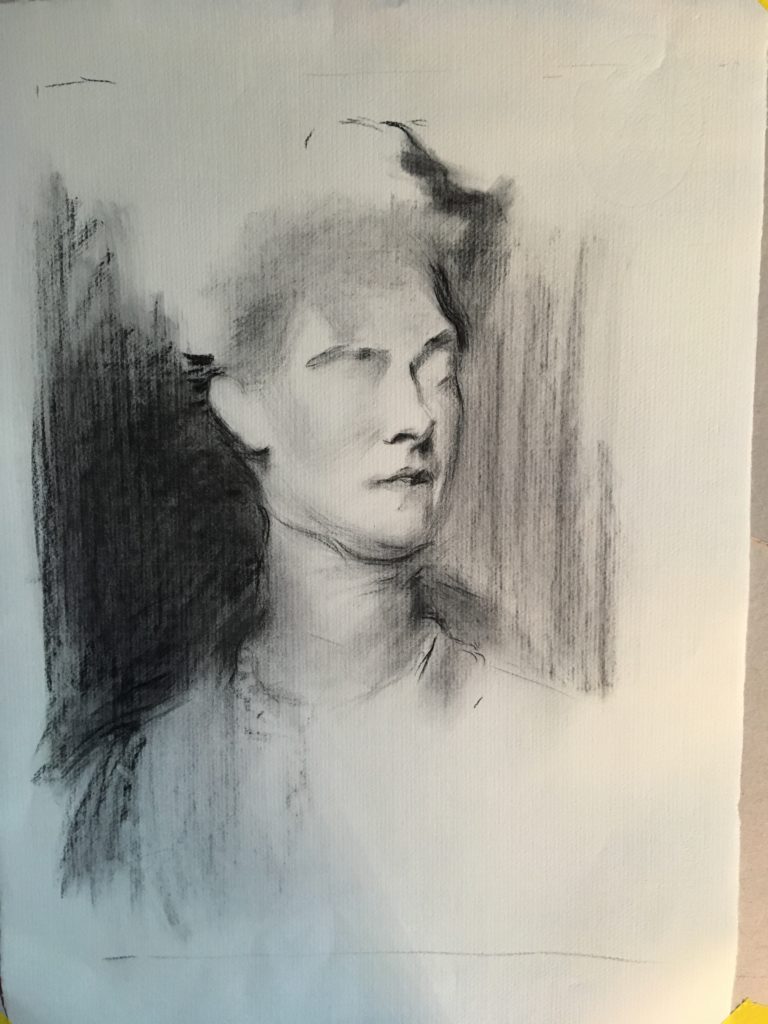 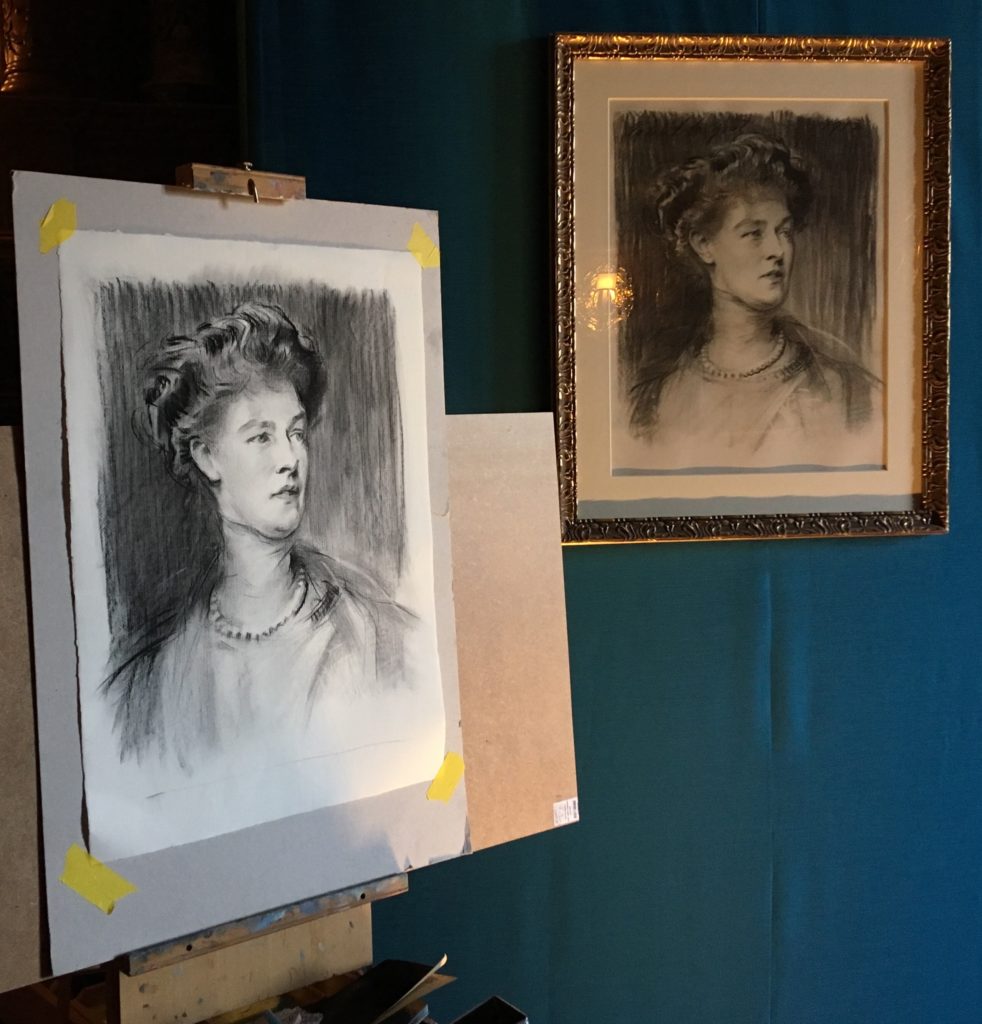 The finished copy alongside the original 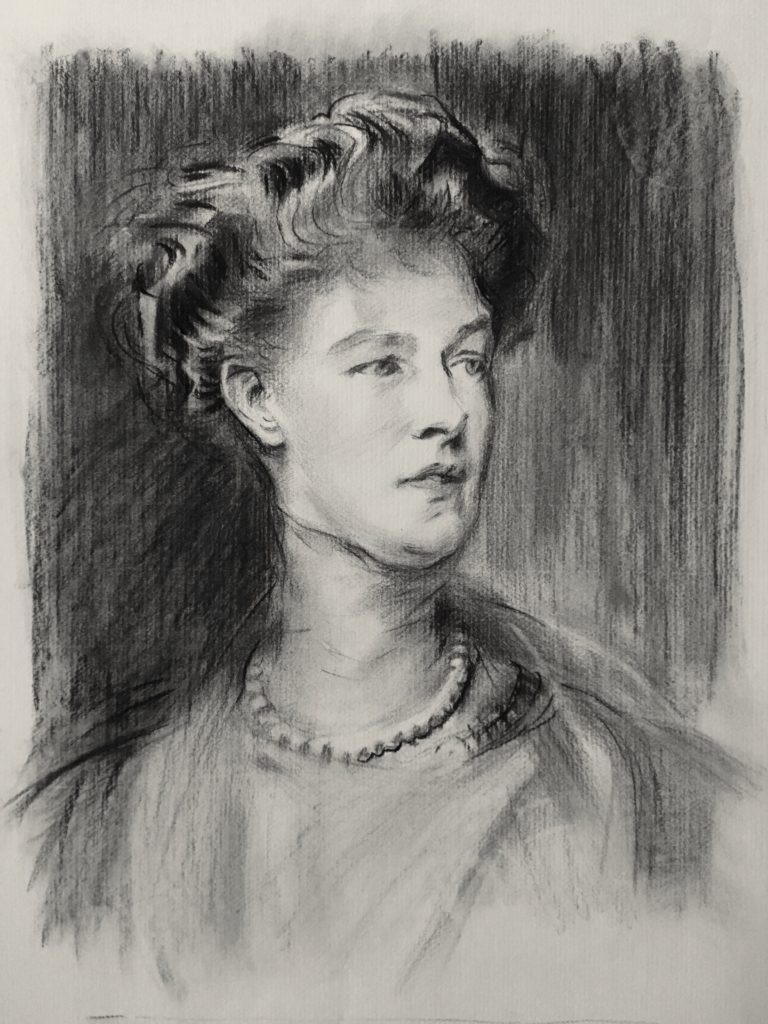 Another painting by Sargent, also in Wales.  Sargent painted this whilst stuck in Austria after the outbreak of WW1 & finding himself unable to return home.  The National Museum of Wales presents surprising amount of impressive paintings to see, including a striking portrait by Rembrandt. It’s well worth a visit if you are in Cardiff.  You can read a short article about this painting here. 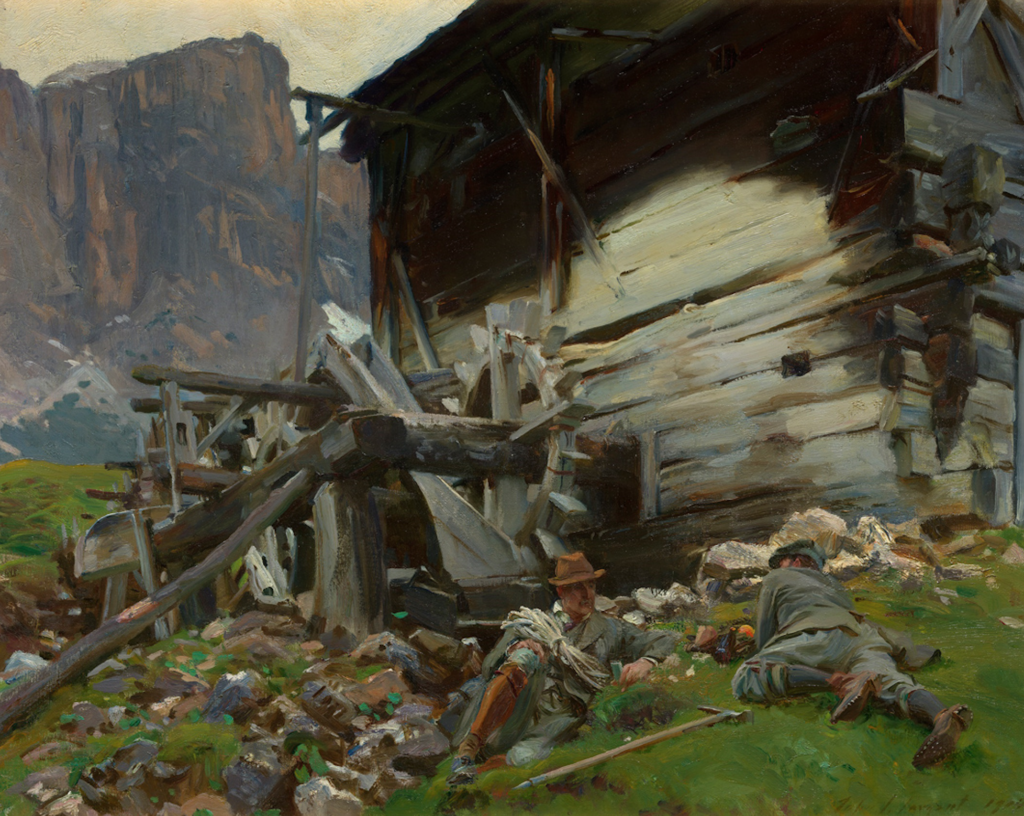 After walking around the castle many times, deliberating on where I should paint, or ‘start painting’ I eventually decided on the ‘Long Gallery’.  The ‘Long Gallery’ consisting of the ‘Twelve Caesars’ is particularly impressive.  Strange, to think this space was used as an ‘exercise area’ during bad weather.  You can’t see it in the painting but to my right is a ‘Pietre Dure’ table. An Italian labour of love, 450 years old features a marble top inlaid with lapis lazuli and other semi-precious stones. God knows how they managed to get it up to the 1st floor of the Castle! Herbert family legend holds that the table was a gift from the Pope.

The Twelve Caesars: (situated on the viewers right. See painting image below)
These late 17th-century Italian busts are the earliest known surviving set of the Twelve Caesars in Great Britain. The set has been at Powis since at least 1704 and is made of Carrara marble and jasper. Each statue weighs about 150kg so major structural work had to be carried out in the Long Gallery in 2007 to ensure the floor would support them for many years to come.
So, below is my first interior painting completed. 60x45cm, oils on canvas.  Titled  ‘The Twelve Caesars’. 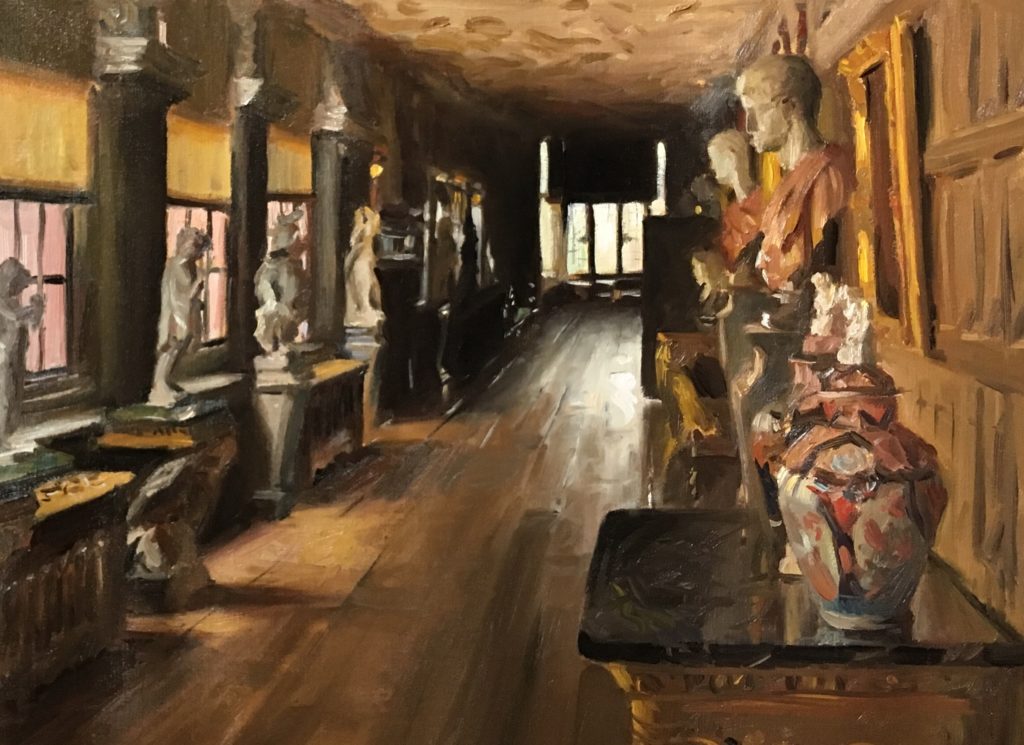 Painting of the Long gallery at Powis Castle. oil on canvas